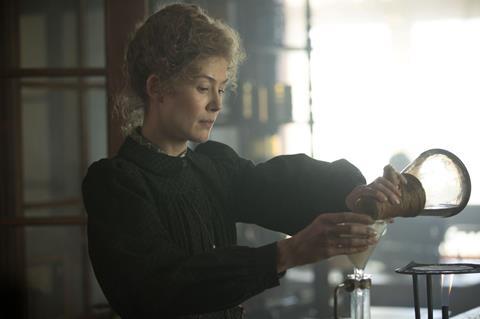 Death, illness and disappointment riddle Radioactive, an uneven but intelligent biopic about Marie Curie that fights against its inherent conventionality. Aided by Rosamund Pike’s edgy, sneakily vulnerable portrayal of the two-time Nobel Prize-winning scientist, Persepolis director Marjane Satrapi measures the full weight of Curie’s achievements, asking whether her discoveries brought more harm than good — both to her and the world. Though sometimes disappointingly broad, Radioactive nonetheless possesses a thoughtfulness that gives the film its stubborn spark.

A strikingly melancholy portrait — imperfect but churning with ideas

Toronto’s closing-night entry will benefit from Pike’s star power, and because Radioactive is also a love story, the film may attract the same crowds that supported On The Basis Of Sex ($39 million worldwide), which similarly is based on actual events and focuses on a married couple who support each other’s aspirations.

Pike plays Marie, who at the end of the 19th century is struggling to establish herself as a respected scientist in Paris, but her gender holds her back in the eyes of her male colleagues. With nowhere else to turn, she accepts the invitation of Pierre Curie (Sam Riley) to work in his laboratory; he appreciates her brilliance and proposes they collaborate. Marie is wary of eliciting anyone’s pity, but she soon becomes attracted to his mind and his willingness to let her pursue her ambitions.

For much of Radioactive’s first half, Satrapi (working from Lauren Redniss’ nonfiction book) explores Marie and Pierre’s courtship, which is powered by their shared love of scientific advancement. Pike and Riley have a terrific rapport — Marie consistently tests Pierre, insisting he treat her as an equal — and the film ably illustrates their mutual admiration. Riley gives us an endearing, sensitive Pierre who understands what Marie has to endure as a woman but also pushes her to even greater heights.

Like many biopics, Radioactive presents too many incidents from its subject’s life, reducing certain highlight moments to mundane montage recaps and occasionally losing sight of the human being within the achievements. But when Satrapi colours outside the margins, she tends to come up with intriguing digressions, complicating our feelings about Marie Curie and her accomplishments.

Marie’s discovery, alongside her husband, of radium and polonium helped revolutionise the world and made their names, but Radioactive doesn’t ignore the unexpected consequences. Satrapi flash-forwards to dreamlike vignettes — including the nuclear bombing of Japan and the Chernobyl disaster — to suggest the terrible repercussions of the Curies’ findings. Plus, we see Marie and Pierre suffer crippling sickness — the radiation they spent so many years closely studying led to their physical deterioration.

Even when Radioactive falters, Pike’s calm authority gives the film a strong centre. Haunted by the death of her mother as a child, Marie refused to ever go back inside a hospital, and the film argues that she was never able to escape heartbreak. Whether it was her era’s sexism, the tragedy that befell her beloved Pierre or the ways the world would use radiation for ill, Marie Curie would come to understand that her genius and her drive were not enough. As a result, this is a strikingly melancholy portrait — imperfect but churning with ideas.

Screenplay: Jack Thorne, based on the book by Lauren Redniss