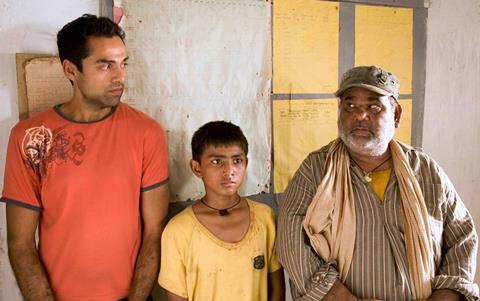 There is an immense likeability to Road, Movie, the third feature from writer/director Dev Benegal. Set in the barren desert landscapes of an unfamiliar India, it offers a picaresque journey of self-discovery given added flavour by generous dashes of adventure, comedy and romance.

Road, Movie unfolds with such composure and understatement that it cannot help but beguile

Opening the Generation 14plus competition at Berlin, this film’s engaging spirit and gentle nature render it very approachable for international audiences looking beyond Bollywood for what Indian cinema has to offer. The level of craft and easy charm should make Road, Movie a modest but viable arthouse prospect in most international territories.

It is the calm confidence of Benegal’s approach that frequently impresses. Road, Movie is inevitably episodic and even far-fetched in places but it unfolds with such composure and understatement that it cannot help but beguile.

Abhay Deol plays Vishnu, a young man desperate to escape a future working as a salesman for his father’s hair oil business. He relishes the chance to drive his uncle’s 1940s Chevy truck across the desert to a museum. Along the way, the cast of characters grows to include a cheeky sidekick in the shape of a runaway boy (Mohammed Faizal), a wise mentor in old desert wanderer Om (Satish Kaushik), and a beautiful gypsy woman (Tannishtha Chatterjee).

Vishnu soon learns that the truck was once a travelling cinema, a reflection of the director’s own past working with a touring cinema in India. The truck still contains projection equipment and reels of film from vintage Indian cinema to the daredevil silent comedies of Hollywood. Screening films in the middle of the desert will provide them all with moments of salvation and reflection.

Cineastes will respond to any film that celebrates the magic of the movies but whilst  Road, Movie carries echoes of The Smallest Show On Earth (1958), The Picture Show Man (1977) and even Cinema Paradiso (1989), Benegal chooses to underplay the sentimentality inherent in the material. It is only in a scene when strangers are united by their laughter at Buster Keaton films that he truly strikes a strong emotional chord.

The film does not shy away from some of the danger or violence on the road but constantly chooses to accentuate the positive and do nothing that might needlessly spoil a pleasant journey. Corrupt cops are pacified by a desert cinema show. A vicious bandit is tamed by an application of hair oil. A fairground suddenly appears in the middle of the desert to the delight of Vishnu and his weary companions as the film gently tumbles towards the realms of magic realism.

If some viewers might have welcomed a little more bite to the story, most audiences will respond to its wholesome nature, the way Michel Amathieu captures the raw beauty of the sunlight landscapes, the vibrant eclecticism of Michael Brook’s score and the lyrical reflections on love , friendship and the ability to take charge of our own destinies.