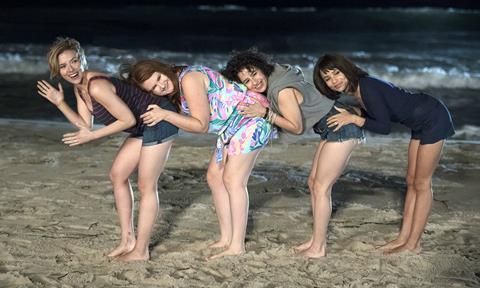 Like many would-be debaucherous evenings, Rough Night starts off with great promise, only to devolve into a series of poor decisions, regretful moments and a general sense of disappointment. A game cast led by Scarlett Johansson hasn’t been given sufficient comedic tools to turn this tale of an ill-fated bachelorette party into the madcap, R-rated romp it very badly wants to be. Some intermittent laughs are mixed with sincere scenes about the complexity of female friendships, but neither element succeeds in making this a Night to remember.

All five actresses have been far funnier in other roles

Sony releases this broad comedy in the US on June 16, hoping to lay claim to some commercial terrain before The House arrives in a few weeks. Johansson supplies star power, alongside an up-and-coming cast that includes Kate McKinnon, Jillian Bell, Ilana Glazer and Zoë Kravitz. Even so, the Bridesmaids-meets-Weekend At Bernie’s premise may only result in moderate grosses.

Johansson plays Jess, a career-oriented woman running for state senate. With her wedding just around the corner, she prepares for an out-of-town bachelorette party thrown by Alice (Bell), her needy best friend who wants to ensure it’s the most amazing weekend of her life. Alongside college pals Blair (Kravitz) and Frankie (Glazer) — and her kooky Australian buddy Pippa (McKinnon) — Jess heads to Miami to sow her wild oats. Unfortunately, their partying leads to the accidental death of a male stripper — and an anxious aftermath in which the women must decide how they’ll hide what they’ve done.

The feature directorial debut of Lucia Aniello, a writer and director on the acclaimed cult sitcom Broad City, Rough Night sets up an awkward tension between Jess and Alice, who were close at school but have drifted apart in recent years. In the midst of this cocaine and booze-fuelled evening, which culminates in the stripper’s death, these two characters aren’t just contending with the possibility of a prison sentence but the immutable fact that they just don’t have much in common anymore.

Aniello, who scripted Rough Night with her writing partner Paul W. Downs (who plays Jess’s ultra-sensitive fiancé Peter), wants to craft a raucous dark comedy with a little heart underneath. And initially, the tart interplay between Jess and her friends sports enough likable moments to raise expectations. But after loosely establishing each character, the movie doesn’t do enough to make them funny, leaving the actors to try to find comedy in their mildly conflicting personalities.

All five actresses have been far funnier in other roles, and Bell (terrific in 22 Jump Street) is particularly hampered by a character whose rampant insecurities become irritating rather than endearing. McKinnon, a scene-stealer in last year’s Ghostbusters, works a loopy Australian accent, but there are only so many dimensions she can bring to a one-note “wacky” character. Playing the level-headed member of the group, Johansson exudes her natural charm but can’t enliven this dull straight-arrow.

Rough Night ought to ramp up once the women begin plotting how to hide the corpse, but their scheming fails to generate much gallows humour. And on a practical level, the filmmakers never hit upon a funny solution to the characters’ nerve-wracking dilemma. Instead, we get strained slapstick and tedious digressions, including a wobbly subplot involving a super-horny middle-aged couple (Ty Burrell and Demi Moore) whose sexual frankness grosses out our heroines.

Meanwhile, a convoluted misunderstanding convinces Peter that Jess is going to cancel the wedding, prompting him to drive cross-country to win her back. Rough Night attempts to subvert typical cinematic gender roles — here, it’s the women who have the wild night, whereas Peter is the mild-mannered person in the relationship. Eventually, Aniello does increases the tension, throwing in a fairly predictable plot twist and introducing additional life-or-death stakes. Consequently, Rough Night becomes funnier near the end, simply because everyone involved embraces the screenplay’s mounting screwball absurdity. But even that can’t help offset a film that, for too much of its running time, feels as lifeless as the stiff that’s meant to kick-start the hilarity.