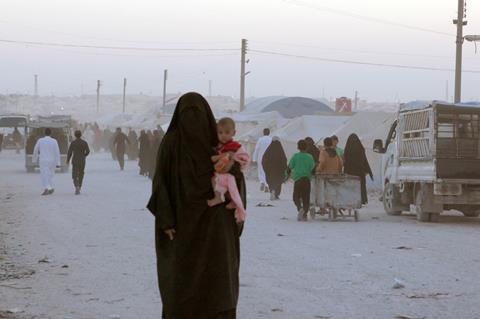 Five years ago, Daesh (ISIS) attacked the Yazidi people of the Sinjar Province of Iraq. Thousands were slaughtered, and yet more Yazidi women and girls were abducted, to be sold and held as ‘Sabaya’ or sex slaves. Many of them remain prisoners, held in tents by Daesh sympathisers in the vast Al-Hol Camp in northeastern Syria, widely regarded as the most dangerous refugee settlement in the Middle East. It is here that Mahmud, Shejk and a group of fearless female infiltrators rescue the Yazidi women, one by one. Remarkable access and nerves of steel (on the part of both the subjects and of filmmaker Hogir Hirori) makes for a riveting documentary which is as tense as it is revealing.

No shortage of heart-in-mouth drama

Sabaya is Swedish/Kurdish filmmaker Hirori’s follow up to the multi-award-winning The Deminer, which premiered at IDFA 2017 and received the Special Jury Award for Best Documentary Feature. Following on from its world premiere at Sundance, the film should be high on the wishlists for further festivals, particularly those events with an emphasis on human rights. And working on the assumption that audience interest in stories from the war-torn areas of the Middle East remains strong following the success of For Sama, documentary distributors should also express an interest.

While there is no shortage of heart-in-mouth drama, the film differs in approach from pictures like For Sama in the slightly more arm’s length relationship it builds with its central characters. The main focus of the film is Mahmud, a volunteer for an organisation called Yazidi Home Center. Driven, stonily serious and glued to a mobile phone which works only sporadically, Mahmud seems oblivious to the camera which shadows him, and certainly has no interest in engaging with it. His preoccupation, to the exclusion of pretty much everything else, is always the next young woman to be located and rescued. It’s a mission that sometimes sees him at odds with his wife, Siham, who is only too aware of the risks her husband takes night after night, while she shoulders the responsibilities of family and home.

That home, it transpires, plays a crucial part in the rehabilitation of the rescued girls and women. Pulled, under cover of night, from the camp, they then recover for a time in Mahmud’s house. There, his wife and his mother Zahra take over the care, coaxing the traumatised former captives back from the brink of despair. The simple comfort of a family home is starkly juxtaposed with the world around them. The photography has a sulphurous cast; the night skies are lit by the flames from fields burned by Daesh sympathisers. News reports filter through of car bombs, of Trump-sanctioned Turkish assaults on the region.

Footage from the camp itself is shadowed by the very real threat of discovery. Some of it is shot covertly through a burka; in another scene, a group of new ‘infiltrators’ – former Sabayas who have volunteered to return to the camp to help rescue other captive women – wait in a makeshift office while a gunfight rages outside. The courage of the infiltrators is remarkable, and ideally we would want to know more about them. However given the vulnerable position they are in, living undercover in Al-Hol, it is perhaps not surprising that they don’t feel inclined to share confidences with the camera. And ultimately, Hirori’s subtle and unobtrusive approach is one of the film’s strengths – he affords the Sabaya agency over how much they chose to reveal, and a respect which has long been absent from their lives.