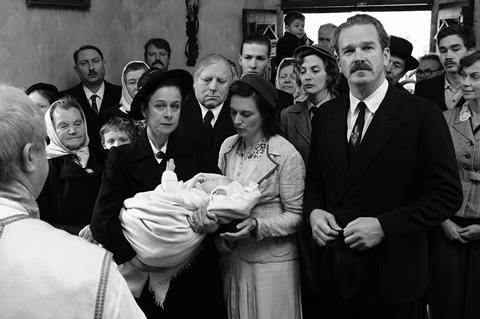 Unfolding over the course of nearly two decades, and set in a border community which has been both Austrian and Czech, depending on prevailing political fortunes, Bohdan Slama’s arresting black and white period drama takes a real-life massacre in the aftermath of WWII as inspiration. Through the fates of families and central figures in the fictional village of Schwarzwald, Slama pieces together a bleakly powerful account of neighbours turning against neighbours, of petty grudges and slights with deadly consequences. With its extensive cast of characters and tangle of motivations, it takes a while for the film to gain momentum. But Slama’s sure hand guides us towards a conclusion which, like anything which deals with nationalism, smouldering tensions and contested borders, feels uncomfortably timely right now.

It’s an accomplished piece which, by combining images of harsh beauty with accounts of humanity at its most grotesque, shares something of the tone (if not the full nihilistic horror) of Robert Schwentke’s The Captain. It’s a picture which, in normal times, would likely find acclaim on the festival circuit. In the current climate, it could be of interest to curated streaming platforms.

With its stark, stunning cinematography (Divis Marek shoots on film and favours long eddying tracking shots which weave in and out of village life) and sweeping scope, this represents a change in tone for Slama, who is better known for the naturalistic humanism of films like Something Like Happiness and his most recent picture, Ice Mother. But in common with most of his work, Shadow Country celebrates the decency and common sense of the female characters: they are the chink of hope to which we cling in the face of the cruelty, savagery and spiteful retribution meted out by the men of the village.

The story unfolds in the fictional town of Schwarzwald, on the border between Austria and Czechoslovakia. It has been claimed by both countries over the course of the previous century but most recently has been annexed by Czechoslovakia. Its people are torn between conflicting identities and nationalities at the best of times. But with the advance of the Nazis, the inhabitants of Schwarzwald must choose – allegiance to the Reich and the promise of farming subsidies, or Czech nationality and poverty. Jews in the community are targeted, their businesses vandalised. Josef (Csongor Kassai), whose wife is Jewish, is tarred and feathered by unknown assailants during a village festival hastily convened to welcome the German forces.

By the end of the war, the villages who assumed German citizenship have profited handsomely, among them Veberova (Magdalena Borova), a Czech woman married to a German. But once the Nazis have been defeated, the tide in Schwarzwald turns against those who are deemed to have been ‘collaborators’. Some are deserving of condemnation, others have done little more than chose the wrong side. Josef, sent to a concentration camp for his resistance activities, returns, the wounds of his wartime suffering still fresh, and assumes a central role in the dispensing of arbitrary justice. In his self-righteous fervour, Josef imagines guilt everywhere. “The people won’t forget what you did,” he tells Verberova, who, having been forced to live in the woods under a tarpaulin, is allowed back, to live once again among her former friends and neighbours. But it was he, Josef, who ordered Verberova’s husband to dig his own grave, before having him shot. Josef’s daughter, Zdenka, looks on aghast; she is the moral compass in this lost community. And Josef finds it increasingly hard to meet her eyes.