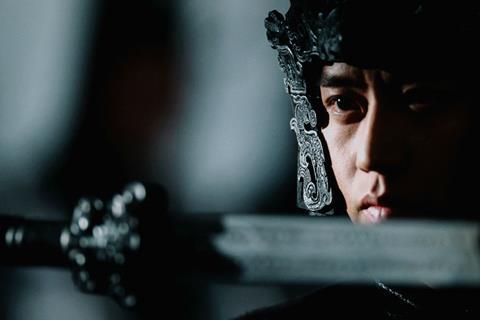 There’s a particular adjustment in Zhang Yimou’s latest foray into martial arts action, namely the decision to base his visual style on the ink brush technique of Chinese painting. A director known for the sumptuous colour of his epics now works in a near consistently monochrome palette. The result is striking and, unsurprisingly, just as beautiful.

As the action builds, Zhang never loses sight of his characters

With action scenes choreographed with Zhang’s typical verve and imagination – you’ll never again think of your umbrella as just a tool for keeping the rain off – fans of this artistic end of the ‘wu xia’ genre ought to be delighted. After the disappointing martial-monster mash-up of The Great Wall, this represents a return to the majesty and emotional finesse of Hero and House of Flying Daggers.

Shadow is described as a reimagining of an epic tale from the Three Kingdoms period in Chinese history, in the third century. While many in the kingdom of Pei continue to rue the loss of its city, Jing, to a rival nation, the cowardly and self-serving young king (Zheng Kai) is content with a one-sided peace deal, to the extent that he will even serve up his younger sister as a concubine to the enemy. So he’s none too happy with his commander (Deng Chao), who has single-handedly been stoking up tensions with the invaders.

In fact, the virile young commander is not who he seems, but Jing (named after the contested city, just to confuse matters), a double, or “shadow”, engaged to play the role of his master and, if need be, take a dagger for him. The real man (also played by Deng) lurks in a hidden lair, crippled by old wounds and paranoid for his safety. His wife, Madam (Sun Li), is complicit in the ruse and beginning to fall in love with the much healthier – and far less mad – imposter sharing her bed.

With the commander training Jing for a duel with his opposite number, General Yang (Jun Hu), which he plans as a decoy for a secret mission to retake the city, and the king playing his own game of second-guess, the stage is set for a feast of court and romantic intrigue. Though slow in patches, the deceits, double-crosses and surprises build to a gleeful finale. En route, comes the spectacle of it all. And there are few contemporary directors who create milieu and shoot action scenes with such intoxicating bravura as the two-time winner of the Golden Lion (The Story Of Qiu Ju, Not One Less).

Given the inspiration for the style, the more obvious approach may have been to shoot in black and white. Instead, the ink brush technique and its predominantly black, white and charcoal palette appears to have been achieved through vigorous costume and production design – from the grey, rain-drenched mountain ranges that surround the kingdom, to the slate floors and the calligraphy covered panels within, a combat training arena designed around the tai chi diagram, and the divine patterning of the characters’ robes.

When colour occasionally intrudes, it’s to offer reminders of the human or natural dimension: the sudden warmth of a person’s flesh, the brown of a bamboo staff, green foliage, and of course great slashes of blood red.

As always, Yimou’s ingenuity with combat scenes extends to both the intimate and large-scale. It’s Madam who understands that the only way to combat the man-mountain General Hu’s bludgeoning staff is with “the feminine touch” and a weapon that can deflect his blows. The training scene in which she and Jing take on the commander with a conventional umbrella – the pair twisting together through the air as they twirl their disarming new weapon – has all of the grace and gorgeousness associated with Zhang’s choreography.

And the conceit later explodes into the large scale, as the commander’s makeshift team of young volunteers – with a cute elfishness in their countenance and armed now with loose-plated steel umbrellas – cascade down a city street like a storm river, their brollies firing off blades as they go. Even Gene Kelly would have been impressed.

Another visual highlight is a floating version of the Trojan Horse. Yet as the action builds, Yimou never loses sight of his characters. Both the battle for Jing and its postscript back at court offer dramatic, surprising and poignant resolutions.

Deng does well in his double role (sturdy and decent, ailing and Machiavellian) but it’s the women – both Sun Li and Guan Xiaotong as the king’s feisty sister – who steal the acting honours. Cinematographer Zhao Xiaoding and production designer Ma Kwong Wing make predictably priceless contributions.