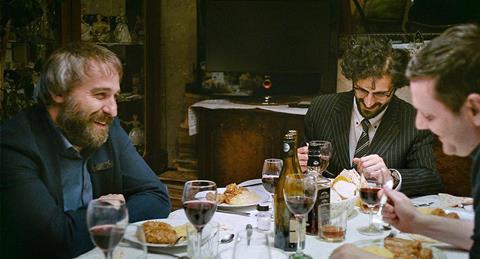 Cristi Puiu’s third story from the Bucharest outskirts (following The Death of Mr. Lazarescu and Aurora) should have been another tough nut to crack. Three hours long, almost entirely shot in one cluttered, old-fashioned flat, family and friends celebrating the memorial of the recently departed pater familias - everything that should scare an average audience away. No wonder so many partners had to join forces before the film could reach the screen. That all these partners could end up sharing one of Cannes’ main trophies, possibly even the top one, would only be their well-deserved reward for taking the plunge.

Like a musical piece, Puiu alternates between tempos, effortlessly goes up and down on the decibel scale

Granted, this is not multiplex fare. But those who aren’t put off by the extensive subtitling will find themselves swept away by this family reunion which offers not only a masterful portrait of the contemporary Romanian middle-class but also a whole set of smart, perceptive reflections on the relativity of truth, on the failings of memory, the interpretation of history, the significance of religion and much more.

Triggered by the memory of his father’s memorial and his own attempts to reconstruct exactly what went on there, Puiu turns this family encounter into an ironic but fascinating, compassionate, carefully-observed clash of characters, opinions and personalities. All are locked in the confined space of a flat, with its doors closing not only on rooms but on issues as well as the camera follows the skirmishes, the misunderstandings, the tensions, the bickering and the arguments which keeps this family apart and united at the same time.

As for the meal they have all come to share together, with a Bunuelian twist, Puiu delays it throughout the entire film. Incessantly talked about, cooked, prepared, courted and even surreptitiously tasted, it never reaches the table before the last sequence.

Shown mostly through the eyes of Lary (Mimi Branescu), the older son of the deceased, the gathering moves from one crisis to another, whether it is the temper of Lary’s wife, Laura (Catalina Moga), the barely hidden frustrations of his sister, Sandra (Judith State), the anguish of his brother Relu (Bogdan Dumitrache), the wailings of his eternally wronged aunt Ofelia (Ana Ciontea), the cockeyed conspiracy theories of his cousin Sebi (Marin Grigore), the communist nostalgia of a relative, Evelina (Tatiana Iekel) and so on.

Each has his turn and Puiu elegantly navigates between them, allows them their moment of truth, but just as with real life, offers only glimpses of information, asking the viewer to fill up the gaps and suggesting that truth is always hidden somewhere, in the middle of all the smattering of evidence he provides.

Like a musical piece, Puiu alternates between tempos, effortlessly goes up and down on the decibel scale, often placing Barbu Balasoiu’s camera at eye level in the apartment’s entrance hall to move from there to one or another room. He never cuts a shot as long as it can be sustained continuously and uses the flat’s many doors not only to close down one space and move to another, but also to shift between issues.

The cast is admirable all through. The coherent precision of their performances is bound to draw an audience in, forgetting that they are watching strangers on the screen and suspecting they’re at a get-together of their own family. What does the title have to do with all this? Nothing really. But that’s another story.