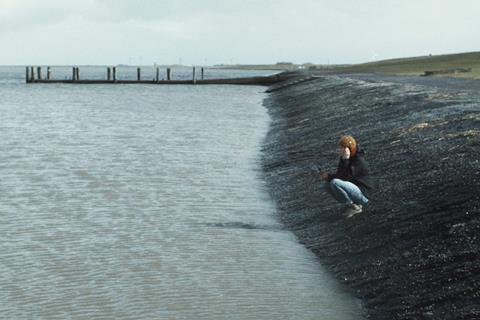 Solastalgia is a form of emotional distress caused by environmental change, and the melancholy of a world in deepening crisis permeates a thoughtful first feature/graduation work from Marina Hufnagel; a cultural anthropology graduate with an interest in the relationship between humans and nature. A clever hybrid of documentary and drama, the film is a celebration of climate change activism and a call to arms for more urgent action by individuals and states; Hufnagel includes many pithy statistics on government promises to address climate issues and the many missed targets along the way. A modest but effective work, it should have a future at specialist festivals and as a primer for debate on the issues covered.

Inspired by the Fridays for Future movement, Edda (Marie Tragousti) is prepared to take to the streets for her beliefs. She is so disappointed by the complacency around her that she subsequently retreats to the North Frisian island of Pellworm. Rising sea levels and extremes of weather mean that Pellworm is experiencing the effects of climate change right now; it is not threat on the distant horizon, but a clear and present danger to the lives of the islanders. Some parts of the island now lie below sea level and when it rains, “the island fills up like a bathtub.”

During her time in Pellworm, the fictional Edda meets real life local farmer Sophie Backsen, a young woman who has filed a legal case against the government claiming that their insufficient climate protection policies have violated her basic human right to a future. Her assertion is that the state has a duty to protect her from climate change. As Sophie feeds her cows and eloquently makes her case, you are reminded a little of the central figure in Benedikt Erlingsson’s Icelandic hit Woman At War (2018).

In some respects, Backsen’s story is the more interesting one and could easily justify a documentary in its own right, but the character of Edda allows Hufnagel to give a voice to an ordinary citizen worried about what is happening in her world. Edda despairs of her siblings Nina (Nina Wesemann) and Jacob (Jonas Egert) as they jet-off to spend a fun-filled weekend in Barcelona. “What would make you rethink your lifestyle?”, she ponders. Edda’s existential crisis allows Hufnagel to raise questions and make observations through the voice-over narration. “ We continue to have faith that someone else will solve the problem for us, “ Edda concludes.

Solastalgia is earnest but always approachable. Hufnagel balances images of life on Pellworm with news reports, streets protests and archive material to make her points. The quiet fury of a climate activist speaking at a UN Conference in 1992 proves just how little progress has been made in the past thirty years. And Hufnagel and cinematographer Felix Riedelsheimer ensure that a film about environmental concerns looks the part. Images constantly underline the power of nature: slate grey skies look as dramatic as a Turner painting; churning seas are muddy and threatening; sand shimmers across wind-swept beaches as another layer of land disappears.

A tight running time means that Solastalgia can risk seeming a little insubstantial and Edda could have been more fleshed out as a character. It is still an honourable response to the climate crisis, however, and asks the fundamental question of what will it take to achieve significant change.