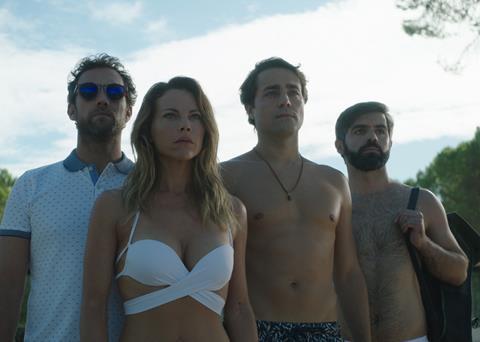 Like the cast of beautiful people draped around the pool, this LQBTQ-themed drama from Portugal is handsome but rather shallow. Four old friends in their forties, their lives interlinked for decades, are spending a long weekend together in a luxury villa in the parched summer countryside. But the easy equanimity between them is upset by a phone call from David, an old friend. He is back in the country after a long absence, and he is driving to meet them all at the house.

The news of the imminent arrival of the mysterious David triggers crises and lots of talky introspection – he has touched the lives of all four, in different ways. And each has hopes and expectations of how the reunion will play out. In advance of Sunburn’s premiere in Tallinn, sales agent Open Reel has secured deals with TLA Releasing for North America, UK, Ireland, France and French-speaking territories. And the film should generate further interest within the festival circuit, particularly – but not exclusively – in LGBTQ events. Yet the thematic similarities with the work of Francois Ozon are skin deep; Sunburn lacks the sense of prickling threat or the emotional substance that Ozon has brought to similarly themed material.

Ricardo Barbosa plays Simao (puppy eyes, a neatly trimmed beard and teeny white swimming trunks), a writer who is working on a screenplay which, it is hinted, is based on the events which tie them all together. Staying in the house with him are Joana (Oceana Basílio), a well-preserved blonde with an addiction to selfies; brooding, intense Francisco (Nuno Pardal), with whom Joana has made a deal to have a child and Vasco (Ricardo Pereira), the handsome romantic who longs to settle down in a cosy, committed relationship.

The friends have settled into a routine of poolside relaxation followed by bowl-sized glasses of gin, and dancing on the patio. But the call from David shocks them out of their glossy world. They stare, uncomprehending, at the pall of smoke on the horizon, noticing for the first time the forest fire which rages just a few miles away. The distant sirens which compete with the cicadas hint at some unfolding disaster just off screen. And then the memories, still painful for all even after a decade without contact with David, start to dominate the conversation.

David seems to have let each of the four down in a uniquely personal way, but the sting of his betrayal has only heightened his appeal. There is much speculation about what – or who – has prompted his visit. And for all the damage that he has previously wrought, each of the men secretly hopes that David is coming for them. Joana, meanwhile, is terrified he will disrupt her plans for parenthood. The device of having the absent David talking in a voiceover to an unspecified member of the party adds a laboured sense of mystery.