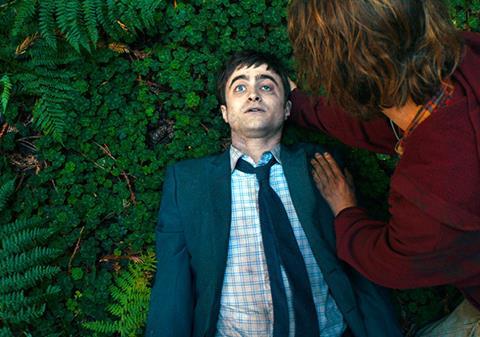 A survival story like no other — for good and for bad — Swiss Army Man is a powerfully audacious and wilfully odd odyssey that is too nervy and strangely emotional to dismiss outright but, ultimately, isn’t satisfying enough to provoke a full-throated defence, either. The feature debut of music video directors Daniel Kwan and Daniel Scheinert stars Paul Dano as a shipwrecked man who befriends a dead body played by Daniel Radcliffe, and what follows is an off-kilter tale of masculinity and male bonding that zigs and zags in progressively more surreal ways. Swiss Army Man is profoundly on its own wavelength, and it’s a testament to its actors that the film almost succeeds on its own bizarre terms.

The movie is vigorously self-indulgent, and yet it can also stir almost primal feelings about what it means to be human

Screening in Sundance’s US Dramatic competition, Swiss Army Man seems destined to be a divisive work, stirring passionate fans as it alienates others. Dano and Radcliffe’s names will be alluring to buyers, but this is a movie catering to those who like their films spiked with strangeness. It seems unlikely that Swiss Army Man will cross over to the mainstream, making it a speciality item.

As Swiss Army Man begins, Hank (Dano) is marooned on a desert island alone, contemplating suicide. Just then, he notices a dead body (Radcliffe) washed up on the shore. Discovering that the deceased is expelling a lot of gas, Hank uses the corpse like a jet ski to propel him off the island, waking up somewhere on the California coast. Soon, though, Hank realizes that his companion isn’t dead: maming him Manny, Hank tries to help him regain his memory and teach him how human beings behave.

Once Kwan and Scheinert (who also wrote the script together) introduce the fact that Manny is alive, Swiss Army Man opens the door to several pressing questions: Is Hank crazy? Does Manny have some sort of mystical power that allowed him to return from the dead? Or are both Hank and Manny dead? For most of its running time, the film provocatively doesn’t provide any answers, simply creating a skewed reality in which the catatonic Manny’s limbs can be used as survival tools as the two men traverse an abandoned beach and a desolate forest on the American mainland.

Adding to the film’s conceits, Swiss Army Man introduces the notion that however Manny died, he now no longer remembers the basic tenets of human experience, such as love and friendship. This creates a running dialogue between the two unlikely friends as Hank explains existence to Manny, whose vocabulary starts off rather primitive until he begins to catch on. And although the filmmakers remain opaque about exactly what we’re witnessing, it seems rather obvious that Hank’s friendship with Manny is some sort of outward projection of the internal issues that were plaguing Hank before he found himself on that island.

Slowly, Swiss Army Man reveals itself to be a study of overly sensitive masculinity in which kind-hearted but meek men feel powerless in the face of a pretty woman they’ve never talked to. (Mary Elizabeth Winstead plays a mysterious figure on Manny’s cellphone who will have major significance during the film’s final stretches.) At the same time, the film explores the dynamics of male friendships in decidedly offbeat ways, the two characters forging their own reality out there in the woods as they search for help. That exploration is more interesting because we’re never certain what the truth of Manny’s situation is: Has Hank found a close companion? Or is he merely constructing one from a corpse?

Both actors invest fully in Swiss Army Man’s overly precious, sometimes painfully whimsical design, bringing a grounded believability to an intentionally fantastical scenario. Dano imbues Hank with a wounded sadness while always leaving open the possibility that the character might be experiencing a psychotic break. It’s a performance that’s both tender and jagged.

As for Radcliffe, he’s playing a cross between Frankenstein’s monster and an alien landed on Earth who’s unfamiliar with our customs. But the actor isn’t overly cutesy in his highly physical performance, treating Manny’s inexplicable return to life with a crucial realism, despite the stiff, jerky motions the character makes as he tries to shake off rigor mortis.

Kwan and Scheinert weave elements of the musical and the love story into their survival tale, crafting a hyper-vivid tonal landscape for their characters. The longer Swiss Army Man goes on, the nuttier the proceedings become, the filmmakers plunging us further and further into Hank and Manny’s headspace. The movie is vigorously self-indulgent, and yet it can also stir almost primal feelings about what it means to be human.

Eventually, though, Swiss Army Man has to explain itself in some way, and the resolution isn’t nearly inventive enough to justify the long, strange trip it took to get there. Kwan and Scheinert have clever ideas and an absorbingly distorted aesthetic. But at this stage, they don’t have the discipline or inspiration to turn their audacity into something truly transporting.