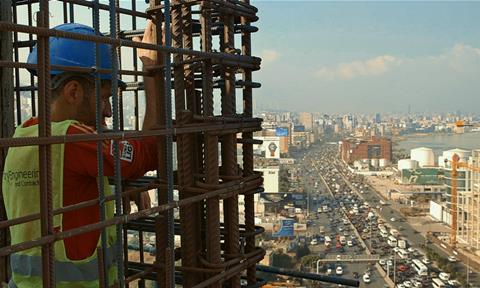 Fiercely lyrical in its approach, potent and unavoidable in its message, this documentary looks at the plight of Syrian migrant workers by weaving the construction of a tower block in Beirut with the destruction of lives back home. It’s an accomplished, thought-provoking piece which elegantly threads together images that mirror and echo each other, and finds harmonies between sound design and score.

Striking as the the film is visually, the sound is also a crucial component throughout.

Its Sarajevo screening follows the film’s premiere at Visions du Réel Film Festival, and precedes an opening night slot at London’s Open City Docs festival in September. Other festival bookings seem likely, and it is also a strong contender for theatrical interest from documentary specialist distributors and dedicated non-fiction screens. Awards notice is not out of the question: Taste Of Cement has been long-listed for the documentary section of the European Film Awards.

Cement is the foundation for this exploration of lives cut adrift. Although none of the workers speak on camera, there is a sparse but evocative narration. It’s the voice of an unnamed Syrian man, who recalls the return of his construction worker father, the corrosive grind of cement dust on skin, the dusty scent of the working man who has returned from Lebanon to Syria.

Now a whole new generation of Syrian men make the same journey but, just as their lives back at home have crumbled, so their rights have been whittled away. The camera lingers over a sign which reads ‘Curfew on Syrian Workers after 7. Any violation is punishable by law.

After the backbreaking toil on the skyscraper, the men climb down into the concrete bowels of the building where they spend their nights, forbidden from leaving the site. There’s an arresting scene, shot from high above, which shows the men in their helmets and hi vis jackets, disappearing, like worker ants, into a jagged hole in the ground.

The underground space is lit by bare lightbulbs and the glow of countless screens, as the men stonily scroll through news reports and photographs of the destruction back home. The camera has no qualms about extreme close ups - we see the reflection of footage of a bombing campaign in the unblinking eye of one of the men. It feels like the camera is trying to climb into closely guarded memories.

Cement is elsewhere - shattered by bombing campaigns in Syria, its dust coating the inside of the lungs of the rescuers who scoop out rubble to get to the people buried underneath. It’s not just these images which are shocking. The frantic clamour of voices in the aftermath of the bombing - howls of terror and anguish - contrasts starkly with the numb silence of the Syrian workers in Beirut. Striking as the the film is visually, the sound is also a crucial component throughout.

In the way it uses visual poetry to describe the world of work, the film has something in common with Liang Zhao’s Behemoth or Rahul Jain’s Machines. But the juxtaposition of conflict and construction gives this picture a harder edge which should disarm any potential criticism about the aestheticising of suffering.