A poetic potrait of a Kentucky man and his community 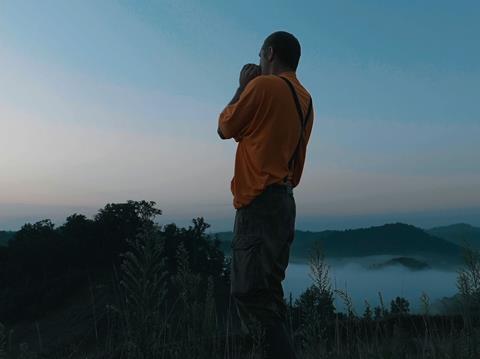 Kentucky dweller Brian Ritchie may not be, as he dubs himself, “the last hillbilly” - but he’s probably the first one you’ve heard muse on the meaning of the label. A poetic close-up portrait of a man and his community, The Last Hillbilly is the first feature collaboration from French duo Diane Sara Bouzgarrou and Thomas Jenkoe, previously noted for their separate medium-length documentaries, I Remember Nothing and Memories of Gehenna respectively. Included in the 2020 selection of the Cannes ACID sidebar, The Last Hillbilly has its international premiere in IDFA, and while the film’s impressionistic, fragmented nature could somewhat limit its prospects, it will score with viewers receptive to formally adventurous documentary and to contemporary harsh-grained Americana.

The setting is Talcum, Eastern Kentucky, where the youngish Brian Ritchie lives and farms with assorted family members, including his two young sons. Brian is heard in voice-over for much of the film, his poetry and reflections on his background and identity providing a consistent thread. One of his motivations is to challenge the stereotypes around the ‘hillbilly’ epithet – the idea that people like him are, as he puts it, ignorant, uneducated, poor, violent, racist and responsible for the rise of Donald Trump. The image is stuck in the 30s, he says - but adds wryly, “and it’s all true.”

Shot in square Academy ratio – with smaller images on a black background at the start – the film offers a mosaic of images of Ritchie’s region, long notable for its coal. The film has three chapters, entitled ‘Under the Family Tree’, ‘The Waste Land’ and ‘Land of Tomorrow’ – the latter supposedly the Iroquois meaning of ‘Kentucky’, although Brian notes that today the state “doesn’t have much of a future attached to it.”

The film is structured as a mosaic of episodes, moments and single striking images: among them, the removal of a dead calf from a pond; a digression on cleaning deer hunting trophies; two young girls, Carolina and Katie, killing time by joyriding on a farm vehicle; and a young boy, Austin, surreally singing a funeral song for a dead fish. In a mesmerising scene around a bonfire at night, an increasingly slurred Brian treats his and other children to a friendly harangue about how things have changed since his youth, with everything the kids love, like iPhones, being entirely new phenomena (“You didn’t have dogs or bikes back then?” asks one child, bewildered).

This sequence is fabulously shot by Jenkoe, the flames combining with an unidentified light source to fascinatingly heightened effect. Jenkoe’s cinemagraphy also takes in evocative single images: an abandoned glove, a valley steeped in cloud, close-ups of scarred or sunburned torsos: overall, the spirit of present-day Kentucky is captured with the rough but poetic precision of American photographers like William Eggleston or Larry Clark in his pre-cinema days. Some images, too, are unnervingly strange: like the opening shots of deer dying in a river from the effects of a disease. Arresting, atmospheric accompaniment comes from Jay Gambit, whose score takes in ominous, bell-like clanging, eerie swirling saxophone, Appalachian instruments and sampled mining sounds.

Running throughout is Brian’s self-aware, contemplative voice-over, ranging from his poetic texts, in an arresting, declamatory tone, to more informal anecdotes or musings on local identity. While we get used to the company of Brian and assorted relatives and friends of different ages, one also feels frustrated by the decision not to always clearly identify them. The effect is all the more confusing as the film was shot over several years, with Brian’s two sons seen at different ages, and with two family members dying at different points of a seemingly non-chronological montage.

The film’s depiction of its subjects achieves a sense of empathetic closeness, much as in the stylised documentary portraits of Ben Rivers’s Two Years at Sea or Ramell Ross’s Hale County This Morning, This Evening. Yet, despite its somewhat free-associative structure, The Last Hillbilly falls between two stools: the film-makers could profitably have chosen either to push their experimental structure a little further, or to be more straightforward in presenting their characters. The viewer ultimately feels not quite immersed in the world depicted here: it’s a good place to visit, but the trip could have taken us a little deeper.