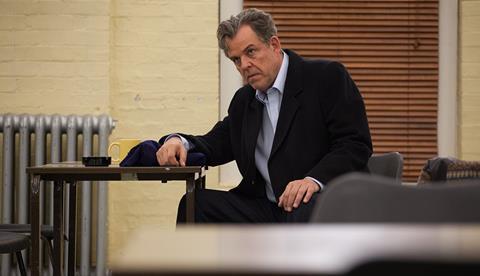 Danny Huston returns to directing after a twenty year hiatus with The Last Photograph, a film which takes the tragic loss of Pan Am 103 over Lockerbie in Scotland as a device to explore one man’s grief and the process of letting go. The fragmented structure and sometimes impressionistic approach owes something to the tone poem filmmaking of Terrence Malick. However, although the story deals with emotionally wrenching themes, there is a coolness here which keeps us at arm’s length.

The structure of the film is splintered, mirroring the shattered life that Tom is trying to piece together.

Even at an economic 85 minute running time, the story feels a little thin. Rather than concrete, the grief here is intangible, rather like the memories to which bereaved father Tom (Huston) clings. Danny Huston’s name and associated seal of quality will be likely to generate audience interest; it’s a picture which should have a healthy life on the festival circuit. (Huston’s last feature film was the Burt Reynolds vehicle The Maddening in 1995, followed by the German-language made-for-TV fairytale Der Eisprinzessin in 1996)

The story is split between two timelines. One, in 1988, leads up to the dark December night on which a terrorist attack blew a flight from Heathrow to New York out of the sky. The other is in 2003, where well-to-do bookshop owner Tom Hammond has cut himself off from everything in an attempt to numb the pain of his son Luke’s (Jonah Hauer-King) death in the Lockerbie disaster. The structure is splintered, mirroring the shattered life that Tom is trying to piece together.

The incident which sends Tom into a tailspin is the theft of his bag from his bookshop. Inside is a treasured possession – the last polaroid photograph of Tom and Luke together, taken at a festive black tie celebration a few days before Luke boarded the fateful flight. The photo, and the christmas gift that Tom was never able to give to his son, have taken on a totemic importance. The latter, a sweater, Tom sent to the girl that his son was flying to meet, a young American called Kate (Stacy Martin). Over the course of his healing, Tom opens up to a relationship with a woman who owns a cafe near his shop, played with warmth by Sarita Choudhury.

The film employs something of a mishmash of techniques. Some, but not all, of the 1988 flashbacks are rendered in black and white. There’s a woozy, slightly hallucinatory sequence in which Tom searches for the thieves who took his bag. Other scenes are shot with a flat, matter-of-fact realism. One of the stronger elements is the textured layering of the sound design, which meld with and compliments the score, giving an indication of Tom’s state of mind. This is helpful to the audience: Huston plays the character as a man buttoned up and battened down against the storm of grief he is suffering. While it’s a convincing portrayal, it isn’t always a dramatically dynamic one.