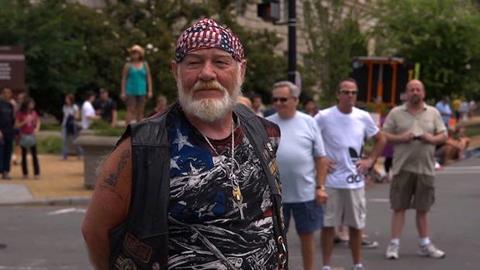 Sympathetic without being sentimental or condescending, Stray Dog is an enormously touching, understated look at an aging Vietnam veteran still wrestling with the invisible scars of a war that took place some 40 years ago. This documentary, the first from Winter’s Bone filmmaker Debra Granik, utilises an observational, unobtrusive style that reaps major rewards, offering a casual glimpse into a series of lives on the margins of American society, touching on family, faith, love and survival with an effortless grace.

Resisting resorting to talking-head interviews, Granik prefers a slice-of-life portrait of Hall and the people around him, catching snippets of his life without worrying about explaining the importance of every moment.

Premiering at the Los Angeles Film Festival, Stray Dog will draw interest from buyers thanks to Granik’s art-house reputation. (Besides launching the career of Jennifer Lawrence, Winter’s Bone was nominated for four Oscars, including Best Picture.) Furthermore, at a time when the American people are coming to terms with the legacy of their wars in Afghanistan and Iraq — and current headlines chart the failure of the Department of Veteran Affairs to care for the country’s returning soldiers — this film could strike a chord with audiences that are pondering the toll that combat takes on soldiers.

Stray Dog follows the exploits of Ron “Stray Dog” Hall, a small-town Missouri biker and RV park operator whom Granik cast in a supporting role in Winter’s Bone despite his lack of acting experience. Over the course of three years, Stray Dog observes Hall as he spends time with his daughter, granddaughter, great-grandson and sister, but Granik’s emphasis is on his complicated relationship with his Vietnam combat experience and his attempt to welcome his new wife Alicia and her twin sons, all from Mexico, into his world.

Resisting resorting to talking-head interviews, Granik prefers a slice-of-life portrait of Hall and the people around him, catching snippets of his life without worrying about explaining the importance of every moment. As a result, Stray Dog comes into focus gradually, starting as a snapshot of a Vietnam vet still very clearly torn up by his time in war — he served two tours — and then expanding to show an entire community troubled by poverty and a dearth of options.

Some of this was explored previously in Winter’s Bone, which was set in a harsh backwoods corner of the Ozarks, but Stray Dog proves to be a gentler and more revealing study of economic inequality, in part because its revelations seem to come about thanks to the filmmaker’s patient, engaged tracking of Hall and his family and friends. Low-key, intimate scenes between Hall and Alicia convey the depth of this burly man’s sweetness and humour, but Granik’s fly-on-the-wall approach allows for plenty of quietly enlightening moments, exposing the sadness Hall still feels about his fallen comrades and the ways in which his military service remains a mixed blessing. (It’s a large part of his identity, as exhibited by the medals he wears on his vest and the stories he tells, but he also sees a therapist because of the trauma the memories still visit upon him.) Rather than straining for grand summations, Stray Dog simply honours its subject’s contradictions, letting Hall and his fellow veterans represent many of the unseen men and women home for war and spiritually adrift.

Initially, the introduction of Alicia’s sons into the documentary — she wants them to leave Mexico City and move in with her and Hall — threatens to upend the delicate spell that Granik has constructed. But soon it becomes clear that Stray Dog is merely widening its scope, suggesting that many of the people in Hall’s orbit are deserving of his canine nickname. Indeed, the film is populated by stray dogs — people who have been devastated by war or saddled with debt or bad choices — and Granik’s warmth and lack of judgment gives them the respect and love that they deserve. Audiences will probably respond in kind.