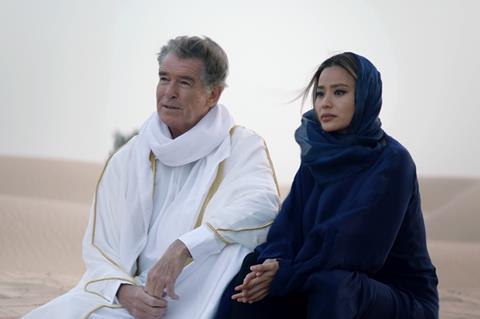 While the titular criminal gang at the centre of this action thriller may be presented as supposedly quirky and unconventional, the film in which they operate is as blunt-edged and cliched as they come. As the ragtag gang of five — which includes a 007-channeling Pierce Brosnan — plan their criminal activities around a Robin Hood thesis of stealing from the rich to protect the poor, veteran director Renny Harlin attempts to buoy the by-the-numbers story with his trademark frenetic editing, rambunctious set pieces and bombastic score, to little success.

As blunt-edged and cliched as they come

Releasing in US cinemas on June 11, with a swift move to on demand and digital on June 15, The Misfits (which has nothing in common with the 1961 John Huston classic which shares the title) may well attract audiences desperate for big screen thrills. It is likely to fare better on demand, but word of mouth may be hampered by lacklustre reviews, and viewers could be turned off by the narrative’s utter lack of nuance or sensitivity — especially as it pertains to issues of culture, gender and race.

That’s a huge problem in any film, but particularly for one set largely in the Middle East as the self-styled criminal squad The Misfits travel to the fictional nation of Jeziristan to rob a prison owned by shadowy English businessman Schultz (Tim Roth). Their convoluted Oceans-esque plan should lead them to gold hidden deep in the bowels of the maximum-security building, which is earmarked to fund unspecified atrocities carried out by a local terrorist group named the Muslim Brotherhood. (Yes, really).

Indeed, much of the film seems to hang on the offensive notion that large swathes of the Middle East are populated by terrorists and sadistic maniacs who think nothing of bombing innocent civilians or clubbing people to death with gold-tipped canes. If this wasn’t bad enough, the fumbled mispronunciation of Arabic names is routinely played for laughs (“Jaseem Bin of something”) and everyone (including camels) is called Abdullah or Muhammed. Equally as egregiously, extended sequences which play out in the gleaming luxury of Abu Dhabi, where gorgeous women in plunging necklines and towering heels walk cheetahs on leashes through decadent hotel lobbies, are less about plot and more about advertising. (One of the film’s production companies is the United Arab Emirate’s FilmGate Productions.)

True, The Misfits themselves are an eclectic bunch — but obviously so, as if screenwriters Robert Henny and Kurt Wimmer realised they had to tick diversity boxes somewhere. There’s smart-talking American Ringo (Nick Cannon), who delivers large swathes of establishing exposition in voiceover; slick European The Prince (Rami Jaber), who claims to be royalty of a country no-one believes exists; floppy-haired Chinese pyromaniac Wick (Mike Angelo, one half of Thai pop duo Golf & Mike); and sassy martial arts expert Violet (Jamie Chung). Brosnan is ageing, self-serving conman Pace, who is initially reluctant to join them on the Jeziristan bank job until he discovers that it has, in fact, been orchestrated by his daughter, Hope (Hermione Corfield), a humanitarian UN worker who is resorting to desperate means to stop terrorist actions after the American government turned a blind eye. (Yes, really.)

That the heist offers Hope and her father time to confront her so-called “daddy issues’ is just one example of the film’s casually sexist attitudes. Others include a plethora of scantily clad women in the background of every scene, an uncomfortable flirtation between Pace and the much-younger Violet and the fact that Shultz is motivated to catch Pace not because of his criminality but because he, as Ringo delicately puts it, “laid pipe in Shultz’s wife”.

And it’s all delivered through a maelstrom of clunky dialogue — Violet’s physical prowess is labelled as “girl power”, Hope tells her father that he’s a good man “under that urban panache and capricious thievery” — and a visual bombast of flash cuts, slow motion explosions, endless car chases and lingering drone shots of the Abu Dhabi skyline. One single sequence turns everything black and white apart from gleaming gold and blood red accents. A high-octane soundtrack veers haphazardly from Middle Eastern-inspired strings to J-pop and rap.