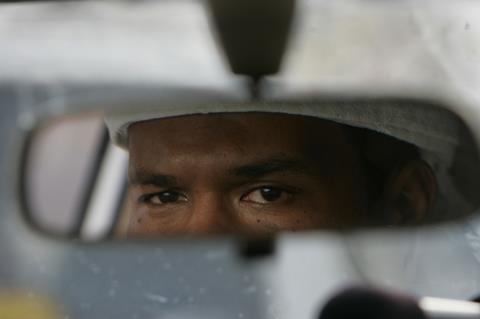 A gripping psychological study of a conflicted former Al-Qaeda member, Laura Poitras’ latest documentary is a valuable addition to the ranks of US features about the fallout of 9/11 as seen from the other side – a strand which includes Iraq In Fragments,  Taxi To The Dark Side, and Poitras’ own Oscar-nominated My Country, My Country.

The film revolves around two men, though we only ever see one of them: Abu Jandal, who was once Osama Bin Laden’s personal bodyguard, but broke his oath of loyalty to Al-Qaeda’s leadership and ended up driving a taxi in Yemen. The other is Abu Jandal’s brother-in-law Salim Hamdan, whom he recruited to be Bin Laden’s driver – and who ended up as a prisoner in Guantanamo. Gradually the film reveals that what happened to Salim was the consequence of a betrayal that still haunts Abu Jandal – even as he tries to defend it.

It’s the dramatic arc of this revelation – deftly controlled and paced by Jonathan Oppenheim’s careful editing, and underlined by Osvaldo Golijov’s haunting soundtrack – that makes The Oath such a fascinating film. This may not be enough to extend its commercial potential, but further festival action looks likely, and TV exposure should be guaranteed.

It would seem that during the lengthy shoot for this film – more than two years – the story seems to have changed a little, and for all The Oath’s editing bravura, the before and after parts still sit a little awkwardly together.

The original strand is focused on Guantanamo detainee Salim Hamdan, who took on the entire US political system up to and including Donald Rumsfeld (in the 2006 Supreme Court case Hamden vs Rumsfeld) in order to protest his innocence. As Hamdan himself is never seen, it’s Brian Mizer – a quietly determined US military lawyer who takes his remit to defend his client with passionate seriousness – who galvanises our interest here. At the same time, though, this legal story, which culminated in Hamdan’s release at the end of 2008, is a digression from the film’s core focus on issues of loyalty and betrayal.

Ultimately, this film is about Abu Jandal - Salim’s wife’s brother.

Near the beginning, Jandal asks his cute son Abu Habeeb ‘Who put Uncle Salem in prison?’ He gets the required response – ‘America’ – but the real answer turns out to be less clear-cut.

We follow Abu Jandal as he chats with passengers in his taxi cab (they seem oddly unfazed by the cameraman, until we realise that there isn’t one: the camera is fixed on his dashboard, and when clients enquire, Jandal tells them it’s turned off).

We see him talking in his apartment with a group of young local men who are keen to know more about Al Qaeda. Good on camera – as when he’s interviewed by Bob Simon for CBS News in 2006 – Jandal is an enigma. He’s a media manipulator but also a philosopher, a jihadi fighter but also a renegade who has received death treats from other Islamists. It’s this enigma, as it concerns the Hamdan “plot”, and the way it is spun out, and  partly, though not entirely, resolved, that lends The Oath its considerable slow-burn dramatic and ethical impact.