‘The Prophet And The Space Aliens’: Thessaloniki Review 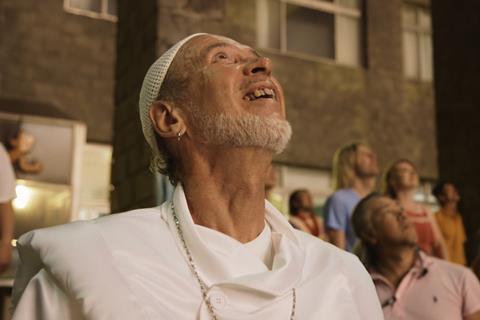 ’The Prophet And The Space Aliens’

A study of religion and true believers, The Prophet And The Space Aliens takes a thoughtful approach to what could potentially be a satiric premise, in which a documentary filmmaker spends time with a self-styled spiritual leader who insists that humanity was created by aliens. Israeli director Yoav Shamir introduces us to Rael, a kindly sexagenarian prophet with a fascinating backstory and some bizarre views. (He’ll happily tell you about his travels to another planet.) But rather than poke fun, the film ponders why so many people worship higher powers — and how faith can be a way for individuals to find meaning in an otherwise incomprehensible existence.

The filmmaker may be a nonbeliever, but you could say he approaches this material in good faith.

The Prophet, which recently premiered at CPH:DOX, screens digitally as part of the Thessaloniki Documentary Festival. This film about Rael and his followers, appropriately called Raelians, has a breezy, accessible tone, making it an appealing programming option. Modest commercial prospects seem possible as well.

Serving as our off-screen narrator, Shamir explains that he was invited to receive an award from the Raelians, which brought him into the orbit of Rael, a beatific Frenchman dressed all in white who preaches a gospel of love and tolerance. Intrigued, the filmmaker decides to profile him, traveling from Asia to West Africa to Canada to learn more about this belief system, which includes a desire to clone human beings. Along the way, Shamir will also uncover Rael’s pre-prophet life — before changing his name, Claude Vorilhon aspired to be a race car driver and spent some years as a musician — and begin to wonder if he isn’t actually an elaborate con artist.

Early on, Shamir (Defamation) makes it known that he’s not religious, but that doesn’t mean he isn’t curious about why people seek out spirituality. The Prophet includes occasional interludes from a separate interview Shamir conducted with a religious historian, Daniel Boyarin, who offers his perspective on society’s enduring belief in gods. This leads to engaging exchanges about the ways that faith is passed from one generation to the next — and why so many religions are built on seemingly outlandish scenarios and supernatural entities. Shamir enters this world with honourable intentions, and whether speaking to Rael or some in his inner circle, the documentarian resists the desire to mock, instead hoping to understand why Raelians (including some scientists) have embraced their beliefs so passionately.

At first, it’s easy to find much that’s laudable about a religion that advocates nonviolence, condemns homophobia and bigotry, and argues that blind devotion to an all-powerful deity has caused the majority of wars. (Better, Rael contends, to worship wise aliens, whom he calls the Elohim.) The Prophet is enlivened by Shamir’s warm rapport with the gentle, unassuming Rael, who seems relatively level-headed — except, of course, for his strange anecdotes about being picked up by extra-terrestrials, who explained to him how humanity’s evolution will involve our consciousness being downloaded into a new, identical body.

But soon, The Prophet takes a turn as we acquire additional information about this religion and Shamir shifts his attitude toward Rael, who starts to resemble a vain megalomaniac. (For instance, it eventually becomes apparent that the beautiful young women who surround Rael aren’t just there for decoration.) Meticulously, the filmmaker dissects the prophet’s early life, convinced that Rael doesn’t actually believe his own tall tale of alien abduction. But even here, the documentary subverts expectations, as Shamir talks to Boyarin in order to figure out why he’s so committed to getting Rael to confess to the scam. In some ways, nonbelievers are as devout in their worldview as believers.

Regrettably, Shamir can be too cutesy in his presentation, shooting for lighthearted, feel-good reactions rather than treating this subject matter with the seriousness it deserves. But his ingratiating style also has its rewards: Because he earns Rael and his followers’ trust, they open up in ways that allow them to be strikingly honest and vulnerable. Although The Prophet is clear that this religion is ludicrous, Shamir doesn’t violate his interviewees’ trust, letting their enthusiasm articulate the eternal mystery of divine devotion. He may be a nonbeliever, but you could say he approaches this material in good faith.