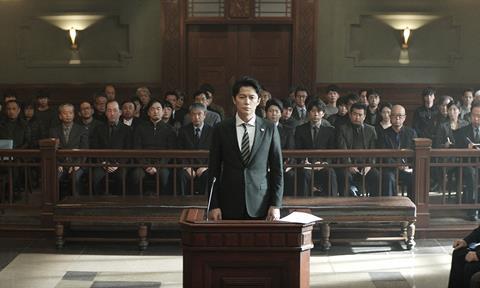 Miles away from the deeply moving family dramas (Nobody Knows, Still Walking, I Wish, After the Storm) he is famous for, this film noir shows Hirokazu Kore-Eda ready to tackle new challenges while preserving many of his favourite themes of the past. Dealing with the relative essence of truth and the fictional justice of law, Kore-Eda’s approach to a kind of Law and Order concept may take his followers by surprise but should ultimately satisfy most, once they realise they are in for a new type of experience.

Kore-Eda,  an auteur in the full sense of the word, tunes his approach to the genre, but only up to a certain point

Though the plot is at times overly-convoluted and the pace may be just a bit too comfortable for a crime story, the sure hand of a director who knows exactly what he wants to put in a frame and how to do it is evident throughout. Impeccable cinematography achieves some remarkably sophisticated imagery and, as one would expect in a Kore-Eda film, a dose of profound humanism allows no villains on screen, unless it is the one character who is done away with in the first instance.

A top lawyer Shigemori Tomoaki (Fukuyama Masaharu, who worked with Kore-Eda in Like Father, Like Son), is asked by one of his associates to join in the defense of an avowed killer, Misumi Takashi (Yakushi Koji), who has already spent 30 years in prison for a previous double murder. Misumi is now back in jail, having willingly admitted that he robbed, killed and burned the body of his former employer. It seems to be an open-and-shut case, but once Shigemori starts digging, interviewing his client and the victim’s family, the evidence is no longer obvious and the cynical attorney, who is much more interested in winning the case than unveiling the truth, begins to doubt that Misumi is indeed the guilty party.

The testimony of the victim’s 14 year-old daughter (Hirose Suzu of Our Little Sister) turns out to be crucial, but just like the rest of the evidence, it is never quite clear how accurate it is - or whether those who provide it are just offering their own perception of what had happened or twisting the facts, consciously or unconsciously, for their own purposes.

While the conflict between Shigemori, who is driven, almost against his will, to unveil the truth, and Misumi, who knows the facts but refuses to reveal them, is at the heart of the picture, Kore-Eda once again takes his audience through a series of reflections on the relations between parents and children, the complexity of human nature, and on the fallacy of the law which ultimately prefers to safeguard its own interests rather than preserve justice at all costs.

Kore-Eda, writer, director and editor, an auteur in the full sense of the word, tunes his approach to the genre, but only up to a certain point. His script, though never judgmental and always displaying enormous sympathy for his characters, can’t disguise his distaste for the judicial system and the courts of law. On the other hand, he is greatly assisted by his two lead actors who keep intact the fundamental ambivalence, crucial in the structure of their characters.

Visually more sombre than usual, Takimoto Mikiya’s use of widescreen is exemplary and the confrontations between Shigemori and Misumi in the jail’s interview room, as they face each other on the two sides of a glass partition, turns out to be more eloquent than anything the dialogue could say about them. Those who are induced by the title to expect a whodunit will most probably be disappointed by the lack of action and length of the dialogues, the rest will however come out wondering, just like Kore-Eda, about the imperfections of the human race and asking themselves who ever gave us the right to judge each other and decide who is guilty and who is not.