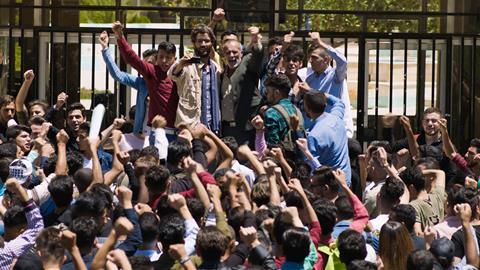 In 2000, Sami (Ziad Bakri) was working as an Arabic-English translator during the Sydney Olympic Games. After a ‘slip of the tongue’, he was compelled to seek asylum in Australia or risk returning to the wrath of the Syrian regime. Eleven years later, with the Arab Spring simmering, Sami learns that his brother Zaid has been arrested. He decides to risk everything by returning to Syria to find him, in this urgent political thriller which examines the difference between speaking the words of others and actually having a voice.

The personal nature of this first feature adds a further layer of interest for potential distributors. The directors, Rana Kazkaz and Anas Khalaf, are a couple who were living in Damascus at the beginning of the Syrian revolution, but chose not to protest for fear of arrest or worse. Like the protagonist of this picture, it is a decision that they later wrestled with. Now based in Doha, the couple has written and directed five short films, including Mare Nostrum, which screened at Sundance and Dubai among numerous others, and has now received 36 awards. The film’s topicality, plus the profile of the shorts, should translate to further festival interest.

Sami’s back story – a father who was arrested and ‘disappeared’ during protests 30 years before the Arab Spring; a brother who was always that little bit braver; a life and a fiancee in Australia – is introduced in a series of blunt preludes to the main body of the story. The threads which bind Sami to his mother country are emotional, and loaded with guilt. When asked by his friend and colleague, a foreign correspondent named Chase (David Field), to translate the clips from Syrian protests covertly sent by citizen journalists, Sami winces at a shot of a blood-drenched body hauled aloft. “I am not sure I can do this,” he says. But he’s all too aware of the fact that, for his brothers and sisters who remain in Syria, turning off and looking away is not an option.

Then the footage that he dreaded arrives – captured by his sister-in-law Karma (Yumna Marwan) from an upstairs window, it shows his brother hauled from the street by armed men, and bundled into the back of a van. Accompanied by Chase, Sami is smuggled back into Syria, with the aim of rescuing his brother. The naivety of that idea becomes very clear, very quickly. And while he was aware of the personal risk of his journey, Sami hadn’t fully comprehended the danger that his actions posed to his friends and loved ones. Karma has little time for his half-baked plans. She accuses him of being a ‘hider’ – a translator hiding behind other people’s words, an Australian citizen hiding behind the privilege of his passport.

But even for Sami, for whom hiding is second nature, it’s not possible to stay under the radar in a city stripped raw by paranoia and fear. Rumours are currency. And Sami has limited time before the news of his return reaches the ears of those who wish him harm.

While the bellicose score can feel rather overstated, the cinematography, taking its cue from the phone footage which prompted Sami’s journey, is handheld and panicked. Working in tandem with Bakri’s habitual expression of clenched terror, it gives the film its sense of propulsive desperation. Locations in Jordan, doubling for the Syrian street scenes, are shot through half closed curtains and around the bumpers of parked cars: the feeling of mounting pressure is palpable.