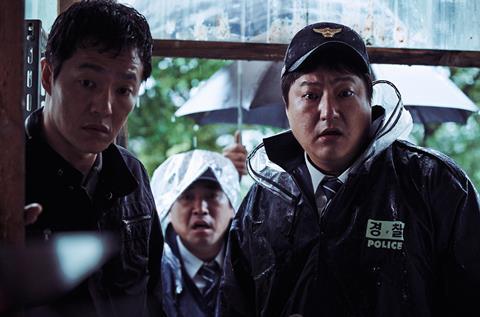 Renowned for his relentless storytelling, Na Hong-jin takes The Wailing to a new level, confirming his place as one of Korea’s leading contemporary filmmakers. Its sheer intensity and ambiguous narrative might put off some viewers, but this latest film - set in a village where people start to mysteriously die when a Japanese stranger appears - could well be regarded as one of the best films to emerge from Korea in recent years.

Na’s The Chaser and The Yellow Sea are riveting thrillers, but what the director accomplishes here is quite different

The film premiered in Korea on May 11, a day earlier than planned owing to favourable critical reaction following the press screening in Seoul. Its fiercely dark tone could potentially limit a wide box office appeal, but positive word-of-mouth will give the film legs, while publicity regarding its Cannes international premiere and the star power of Hwang Jung-min (Veteran) should help internationally. (The Wailing is set for a North American release on May 27 through Well Go USA.) Produced by Fox International Productions as opposed to a major local studio, The Wailing could provoke discussion about the studio system in Korea, which has changed considerably since the peak of contemporary Korean cinema in the early 2000s.

The film is set in a rural village in the area of Goksung (the film’s local title), which also means ‘wailing’ in Korean. It starts out with a string of unusual deaths, all preceeded by red boils and aggressive behaviour. Local officers including Jong-gu (Kwak Do-won) are perplexed by the outbreak, initially suspecting that mushrooms might be the cause. But as more people succumb to the mysterious disease, suspicions about the cause of the virus fixate on a Japanese stranger (Kunimura Jun) who never seems far away from events.

Once Jong-gu’s daughter begins showing symptoms by lashing out at her father, his hunt becomes more urgent and he sets out to find this strange Japanese man. As her condition worsens, the family also seeks the help of a shaman, played by Hwang Jung-min.

To say any more would spoil the show, but suffice to say that Na’s screenplay takes viewers to the root of evil in a manner that subverts expectations and cleverly manipulates cause and effect at almost every turn.

Na’s The Chaser and The Yellow Sea are riveting thrillers, but what the director accomplishes here is quite different. The Wailing is initially set up as a thriller and the supernatural setting also helps deliver moments akin to a horror feature, particularly when a strange woman (Chun Woo-hee) first appears. But the film’s gradual progression into something more sinister puts a different spin on Na’s masterful use of pacing.

As he takes the audience in one direction, only then to swerve in another, he still manages to include a scene more associated with a zombie feature as violent behaviour takes hold of the town – a lighter touch to an otherwise bleak film, especially in the second half. In another scene involving a shamanistic ritual, the intensity reaches extraordinary levels, yet Na never makes it jarring.

The film’s lack of resolution and perplexing characters, especially the young woman who is never really explained despite a lengthy 156-minute running time, may frustrate some viewers, but Na seems to be deliberately defying expectations - no doubt sparking much post-viewing debate.

Production values are exemplary and it’s quickly evident why it took close to six months to shoot and spent over a year in post-production. Hong Kyung-pyo’s (Snowpiercer) cinematography is outstanding, expertly capturing the gloomy atmosphere of the town and the vast rural landscape that encircles. Jang Young-gyu and Dalpalan’s score adds to the film’s powerful atmospherics.

Again playing with audience’s expectations, Na turns the casting on its head, putting a leading star as a supporting role and vice versa. Hwang Jung-min is at the peak of his commercial career following a string of hits (A Violent Prosecutor, Veteran, Ode to My Father), but he isn’t the star of this show, despite playing a crucial role. It’s the excellent Kwak Do-won (The Attorney), normally a supporting actor, who takes the lead as the policeman, providing able ballast for the story to take hold around.

Kunimura Jun (Kill Bill: Volume 1) is likewise excellent as the Japanese stranger, despite not having much dialogue. Chun Woo-hee doesn’t have much screen time, but hers is another pivotal part.

This film was reviewed from a press screening in Seoul on May 3.