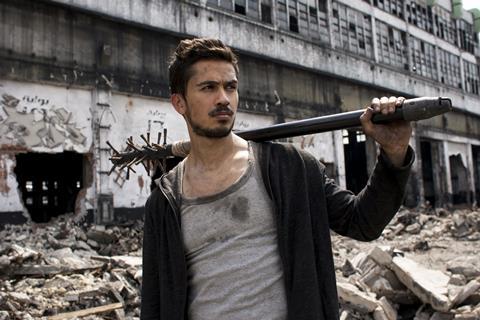 For his third feature, Emirati director Ali F. Mostafa localises another genre with an Arabic language post-Apocalyptic thriller. This professionally-executed, soundstage-bound production, backed by Image Nation Abu Dhabi,  gives the survivalist drama a fresh Middle-Eastern flavour, even if adds little that’s new to the recipe. Intriguingly its coda, which neatly sets up a sequel, is the most innovative part of the piece.

The Worthy is paced well within its tight genre frame

Set to play well to local crowds when it launches across the Middle East in February, 2017, The Worthy will set its sights on becoming the region’s first homegrown blockbuster. Mostafa attacks a standard-issue plot which picks off a band of survivors one by one by one with slick professionalism, although Vikram Weet’s screenplay struggles to make either their predicament or their denouements feel unique. While the leads are variable, two Syrian talents - Samer Al-Masry and Samer Ismael, playing good and evil respectively – are standouts.

For his debut, City of Life (2009) Mostafa adapted the Crash template for Dubai, while 2014’s road trip film From A To B took three old friends from Abu Dhabi to Beirut. The Worthy sees the director tackling another cinematic staple, a simple, no-frills genre exercise. In a post-Apocalyptic world, a band of survivors led by former truck-driver Shuaib (Al-Masry) have retreated to a ruined building where they hold the only fresh water. But when they allow two visitors to enter the compound -  Mussa (Samer Ismael) and Gulbin (Maisa Abd Elhady) – they all become targets in a vicious cat-and-mouse game to determine who is “worthy” to survive.

Mussa is a gleeful, nihilistic villain whose first move is to destroy the water reserves in the film’s most successful sequence, so you know there won’t be any reasoning with him. Unfortunately, however, his opponents are given rather dreary arcs: Shuaib’s son Eissa (Mahmoud Al-Atrash) ends up being Mussa’s main foil, but neither the actor nor the character is a match for such lavish evil. Al-Atrash and Rakeen Saad, as Eissa’s sister, struggle with under-written roles – a peril for the genre – and more experienced hands including Salah Hanoun, Habib Ghulom and Ali Suliman have little to do but wait around for their archetypes to be picked off.

Still, The Worthy is paced well within its tight genre frame, and, unusually, it picks up pace when Mostafa exits his soundstage and sets his mind to establishing a sequel.  Here, the film finally becomes more creative, and gives audiences the Arabic twist which is lacking from the first half. Backed by Image Nation Abu Dhabi and made with Romania’s IBIS, The Worthy does what it can with its restricted setting: the conceptualisation of a post-Apocalyptic Middle-East is TV-level generic, considering such places exist in reality right now, and close by. Yet the fact that this is a professionally-made exercise is clear throughout, from nice CG work in the water tower sequence, an innovative set piece involving a bi-plane’s wings, through to a nicely-judged score.