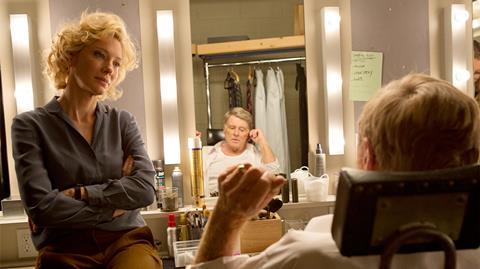 A glut of films which pay tribute to the work of crusading reporters arrives into the marketplace this awards season, even as that marketplace is increasingly abandoning traditional investigative journalism. Black Mass and Spotlight came to the screen via the Boston Globe in one form or another; now Truth is based on the story behind a CBS 60 Minutes report into President Bush’s draft-dodging record which led to the end of Dan Rather’s CBS career; he’s played here by Robert Redford, who starred in the grand-daddy of investigative journalism films, All The Presidents Men.

Redford, meanwhile, is stately as Rather - but he’s clearly Rather as well, it’s no broad-strokes portrayal. He humanises some of the anchor’s sweeping sentiments and conveys dignity in defeat.

Truth will face challenges – this chewy screenplay is of far greater interest to American viewers than international audiences not quite so familiar with the story, the network, the programme, or the characters involved, although Dan Rather has global name recognition. And you can’t help but feel that Aaron Sorkin could have cut through all the initial slabs of exposition in a deft episode of Newsroom, even as James Vanderbilt’s debut stretches out to just over two hours. But despite its awkward start, the film grows significantly in stature, thanks mainly to its two headlining stars who hit all the right notes. Redford reaches the perfect register for Rather, and Cate Blanchett rises to the challenge of portraying his nervy producer and confidante Mary Mapes; “old media” stars who were devoured by a “new media” storm.

The combined appeal of Redford and Blanchett and Truth’s worthy material should secure upmarket distribution worldwide and themed festival play where it will appeal to all those nostalgic for the good old days of crusading journalism (although they prefer to tweet about it these days). Truth is unlikely to have much resonance with the American right wing, though it wil provoke debate as intended and re-ignite the story as the US presidential election heats up. Good Night And Good Luck is a clear recent benchmark, and US distributor SPC (the project was sold internationally by FilmNation), may similarly gamble on an awards play for its cast.

Truth is the directorial debut of writer James Vanderbilt (who penned David Fincher’s Zodiac about the San Francisco Chronicle’s investigation into a serial killer), and he is clearly fascinated by the mechanics of the delivery of news. It is based on Mapes’ own memoir and sticks to her and Rather’s party line on the 2004 report which ultimately led to her dismissal from the network and Rather’s untimely exit after 24 years as a national icon fronting the nightly news (Rather appeared at the film’s Toronto world premiere, where he was visibly moved by the events portrayed onscreen).

Truth has a finicky story to relate, involving a legion of peripheral characters and he-said, she-said testimony over whether or not George Bush may have shirked his duties. The central question is whether Maples and, by extension, Rather, were careless about authenticating a document concerning Bush’s time in the Texas Air National Guard where he served as a pilot during the Vietnam War. (So much exposition is required about the characters and the story they’re investigating, Vanderbilt even resorts at one early stage to having Maples’ seven-year-old son interview her on camera about her job).

Once the story has been aired, though, the film starts to sing. The relationship between the award-winning producer and her anchor is a touching one, and it holds strong, while the interplay between the team of investigators whom Maples brings on for the task (played by Dennis Quaid, Topher Grace, and Elizabeth Moss) becomes increasingly panicked. Blanchett also invests Mapes with a rivetting range of conflicting emotions, although they’re distractingly played out under a cover of super-bouncy hairdo. Shrewd, confident and successful at the picture’s outset, Mapes starts to crumble and doubt herself in yet another gold-standard performance by the Australian actress.

Mapes had admittedly put the report on air with very little time to pull together the sources which claimed Bush had gone AWOL during this time. When cracks appeared, the blogosphere went for her and Rather, and CBS/Viacom (one entity at the time) turned its back. It’s intereting to observe the actress’s disintegration here and contrast it with the controlled aspect of her other big role this year, in Todd Haynes’ uber-formal Carol. Redford, meanwhile, is stately as Rather - but he’s got the full measure of the man, with no broad-strokes portrayal. He humanises some of the anchor’s sweeping sentiments and conveys dignity in defeat.

Truth is solidly made; an interior chamber piece set in corporate boardrooms and CBS newsrooms, a world which is competently delivered by Vanderbilt’s production team. Brian Tyler’s score is didactic, heavily underscoring at the onset and then fading for a while only to shrill back in with a vengeance in the film’s climactic scenes.

Screenplay: James Vanderbilt, based on Truth and Duty: The Press, The President, and The Privilege of Power by Mary Mapes