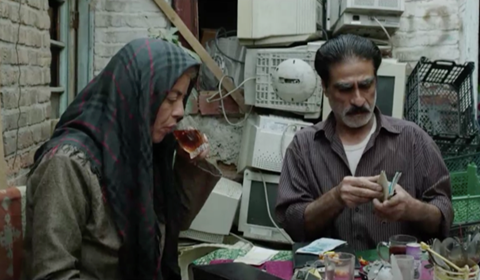 Iranian actress Soheila Golestani (Reza Mirkarimi’s 2014 Iranian Oscar submission Today) makes a confident feature film directing debut with the delicately wrought drama Two. Loosely based on the Bernard Malamud short story The Maid’s Shoes, the film explores the uneasy relationship between Pari (Mahtab Nasirpour), an impoverished maid, pushed by her circumstances and actions to the margins of society, and Bahman (celebrated Iranian star Parviz Parastui, who also produced the film), the taciturn man for whom she works.

Golestani clearly has an aversion to exposition of any kind, which makes the specifics of Pari’s shame rather enigmatic

The very fine performances throughout, plus the intelligently understated cinematography, mark this out as a film which has the potential to connect with the same audience that responded to the combination of universal themes and cultural specificity in Asghar Farhadi’s A Separation. However commercial potential might be hampered by the opaque narrative and the fact that non-Iranians will struggle to grasp the intricacies of Pari’s social stigma.

Fittingly, given her garrulous nature, we hear Pari before we meet her. Her insistent pounding on the door doesn’t endear her to Bahman, an Iranian ex-pat who has returned home to sell the apartment of his late father and all its contents. When he brusquely sends her away, she tries to force her way past him, an edge of desperation sharpening her already shrill voice. “I’m a cleaner, not a beggar,” she wails.

Despite this inauspicious first encounter and the fact that he wanted help with furniture removal rather than a maid, Bahman is persuaded by a relative to employ her. He shrugs off her high-pitched stream of consciousness in the same way you might ignore a wasp, repelling her attempts at conversation with a firm “I don’t want to know anything.” In turn, she moans to her friends that her new place of work is as quiet and cold as a tomb.

However Bahman is not blind to Pari’s plight: her health is suffering and she has been thrown out of the home of her son and his wife. He permits himself an occasional gesture of kindness. Golestani clearly has an aversion to exposition of any kind, which makes the specifics of Pari’s shame rather enigmatic. Suffice to say, it involves debts, and a man – the husband of a sick woman – who has disappeared, leaving an increasingly browbeaten Pari to face a gathering storm.

Parastui is gruff and downbeat in the role of Bahman, content to let his co-star dominate the screen. As Pari, Nasirpour is magnetic. Her hair has the texture of straw and her looks are as threadbare as her clothes. But in her smile and her mercurially expressive eyes, we catch a glimpse of the beauty and warmth that poverty has nearly extinguished.

When the action is within the apartment, cinematographer Peyman Shadmanfar shoots from Pari’s perspective much of the time – we glimpse the action through half closed doors and clouded glass windows. Outside, freed up to explore the livelier world of Pari’s social circle, he uses restless tracking shots through throngs of bickering neighbours and relatives. Less successful is the editing – we are left with the sense that a few vital links in the narrative went missing somewhere along the way.