Gal Gadot makes her debut as Wonder Woman, taking on the god of war in the realm of men 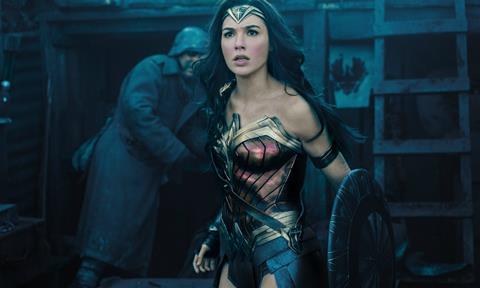 Almost as much an anti-war drama as a summer popcorn romp, Wonder Woman takes its time putting its title character centre stage in all her Amazonian splendour. But when it does get down to superheroine business, this latest DC Comics ‘extended universe’ outing packs a decent punch and, in Israeli model Gal Gadot, introduces a star with real franchise potential.

Gadot has a considerable presence in her own right

The two previous DC extended universe entries have been, by superhero standards, strong but not spectacular performers, with Suicide Squad taking $746m worldwide and Batman v Superman: Dawn of Justice (in which Gadot’s Wonder Woman made a brief appearance) $873m. This female-driven and female-directed third entry – which Warner Bros opens through most of the world over the first weekend of June - could match or even top those numbers by tapping into the current gender equality discussion - and perhaps by reaching out to older audiences who remember the seventies TV series.

In the first of its three distinct locations, the film, scripted by TV and comic book writer Allan Heinberg and directed by Patty Jenkins (best known for 2003 serial killer drama Monster), introduces Wonder Woman-to-be Diana, daughter of the queen of Themyscira, a secret island given by the gods to female warriors the Amazons. The nicely-imagined sequence lays out the Amazons’ slightly fuzzy back story – they’re honing their fighting skills to prepare for a long expected attack from Ares, the god of war – and includes an enjoyable cameo from House of Cards’ Robin Wright.

The arrival on the island (don’t ask how) of World War I American spy Steve Trevor (Chris Pine, from the rebooted Star Trek franchise) prompts Diana to venture into the world of men, where, she believes, Ares is the malevolent force behind the worldwide destruction.

Steve and Diana’s stop-off in London gives the film time to spark a romance, indulge in a bit of gender-based comedy with Steve’s assistant Etta (Lucy Davis, from the original The Office) and introduce some intrigue in the shape of an apparently peace-loving politician (the Harry Potter franchise’s David Thewlis).

The tone gets considerably darker as Diana, Steve and three of Steve’s oddball comrades (the oddest played by Trainspotting’s Ewen Bremner) make their way to the war front in France. Here, more than half way through the film’s two-hour-twenty-minute running time, Diana first goes into action in the red, blue and gold Wonder Woman outfit, complete with bullet-deflecting wristbands and a special ‘godkiller’ sword.

Though the action - which climaxes with a CG-heavy set piece pitting Wonder Woman against Ares - sometimes has a slightly distracting video game feel, it’s often stirring stuff, and it’s skillfully integrated into the developing relationship between the title character and her mortal man.

The chemistry between Gadot and Pine is one of the film’s primary pleasures. But Gadot (best known to movie audiences up to now for her small roles in several The Fast and the Furious films) has a considerable presence in her own right, a quality that will stand her in good stead if, as the film’s brief present-day introductory sequence seems to hint will be the case, Wonder Woman has further big screen adventures.