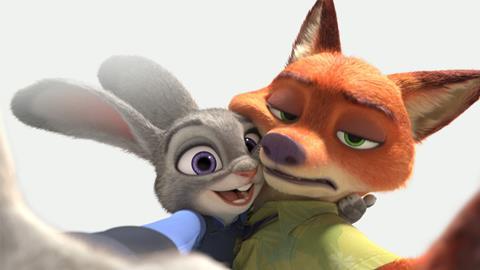 A menagerie of talking animals, a noir-ish mystery story and an anti-prejudice message are all part of Zootopia, a lively but lightweight 3D family adventure from Walt Disney Animation Studios (WDAS). Though each of the elements is effective enough in its own right – and the message adds a bit of topical cachet – they don’t add up to a greater whole, leaving this expertly crafted piece of animation feeling, in the end, like one of the studio’s more middling recent offerings.

Disney is launching the film first in international territories – with a Feb 13 screening at the Brussels Animation Film Festival starting the rollout – and will get the bulk of its take from that marketplace (previous WDAS production Big Hero 6 earned more than two thirds of its $658m global total outside North America). The US release follows on March 4, giving the film a five-week separation from Dreamworks-produced animated rival Kung Fu Panda 3.

The city that gives the film its title is a mammal metropolis with different neighbourhoods for different kinds of creatures - Sahara Square for the desert dwellers, Tundratown for the polar bears and moose, Little Rodentia for the mice and rats – and a downtown melting pot where the great and small usually manage to get along.

Spunky country rabbit Judy Hopps (voiced by Ginnifer Goodwin, from TV’s Once Upon a Time) arrives in the city to become the first bunny police officer and gets involved in a case that is threatening to set the traditional prey animals – the vast majority of the population – against the predator minority. To solve the mystery, Judy reluctantly teams up with Nick Wilde (Jason Bateman), a fast-talking scam artist fox.

The case brings a herd of diverse animals into the action – some, like the sloths at the Department of Motor Vehicles, are used for comic effect, others, like the forgetful elephant and the arctic shrew crime lord, to confound stereotypes.

The variety of cute – and occasionally slightly scary – animals should keep younger kids interested for most of the hour-and-three-quarters running time, while older kids and parents will be diverted by the comedy and pop culture references. Though it never gets too preachy, the film delivers its message about the dangers of stereotyping quite clearly and draws parallels with instances of everyday racial prejudice among humans.