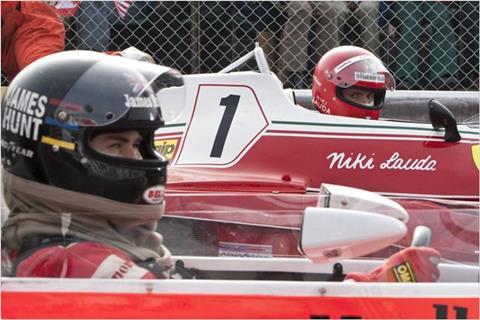 Ron Howard’s exhilarating and exciting delve into the fast and furious world of Formula 1 motor-racing is set against the backdrop of the sport during the 1970s, when everything about F1 was sexy, dangerous, edgy and thrilling. Taking the real-life rivalry between playboy British driver James Hunt and methodical Austrian Niki Lauda as its central story, Rush is the immersive, vibrant and gripping story of two men who were all about winning.

Ron Howard directs impressively and seems to have a real feel for this most international of sports and is aided by a smart, clever and well structured script by Peter Morgan and wonderfully immersive cinematography by Anthony Dod Mantle.

This independently made film brilliantly recreates the era, with Chris Hemsworth and Daniel Bruhl quite excellent as Hunt and Lauda. No doubt hardcore F1 fans may pick holes at certain aspects of the film (some tracks can never be replicated and staging crashes is notoriously hard), but petrol-head film fans will lap up a thrilling film that is driven by energy, intelligence and conviction.

Screening at the Toronto Film Festival and opening in the UK a few days later (it had its world premiere in the UK on September 2) the film is due a more limited release on the US later in the month via Universal, but in truth the very nature of F1 is that it is a truly international motor sport, and the film smartly plays on that aspect and should help it appeal to F1 and sports fans around the world. The success of documentary Senna showed there is an appetite for motor racing, and backed by good reviews Rush could well click with worldwide audiences.

The intense rivalry between Hunt (Hemsworth) and Lauda (Bruhl) during the 1976 championship is well recorded, as is the terrible crash that saw Lauda seriously injured and spend months in rehabilitation. But the film does not take the route of keeping that crash as a pivotal plot point, instead it simply forms part of the patchwork of incidents that helps define what drives these two very different men, which is actually the heart of Rush.

When the film opens, both men are struggling to make their way up through the ranks of the sport. Hunt relishes his playboy image while racing in Formula 3, backed by corpulent, upper class, champagne swiller Lord Hesketh (as lovely cameo from Christian McKay), he may well be all about the sex and cigarettes and booze (and always threw up before a race), but when he stepped into the car he was all focus and extravagant driving skills. Lauda, on the other hand, used family connections to get his drive, but his focus was on planning, precision and not taking undue risks.

Both men can’t stand each other, but Hunt feels especially annoyed when Hesketh pulls the plug on a planned F1 team while Lauda gets a drive. In one delightful scene, a grumpy Hunt is playing with his Scalextric (a electric car racing game) when he gets a phone call offering him a drive with the last team not to have a driver in place.

The film follows the crashes, the romances and the politics of the sport as the two bitter rivals struggle to take the top spot in the rankings, with Lauda’s terrible crash and scenes of his agonising convalescence among the best parts of the film, and certainly acting as moment in the film when the fun-and-games takes second place to the terrible realities of F1 racing.

Though on paper the more heavily built and muscular Australian actor Chris Hemsworth (who starred as God-like superhero Thor) shouldn’t be an obvious call to play the slight, long blond-haired, James Hunt, but he nails the accent and mannerisms and gets better and better as the film draws on. Daniel Bruhl is a dead-ringer for Lauda, and is quite brilliant in the role. Both are at heart oddly unsympathetic personalities, but the film makes the most of their love/hate relationship (okay, it was mostly hate) as they grudgingly come to acknowledge that each needed the other to drive them on.

Ron Howard directs impressively and seems to have a real feel for this most international of sports (and one that has never had the recognition in the US, where NASCAR rules) and is aided by a smart, clever and well structured script by Peter Morgan and wonderfully immersive cinematography by Anthony Dod Mantle. Rush is a fine and exciting film, likely to find a welcoming audience.