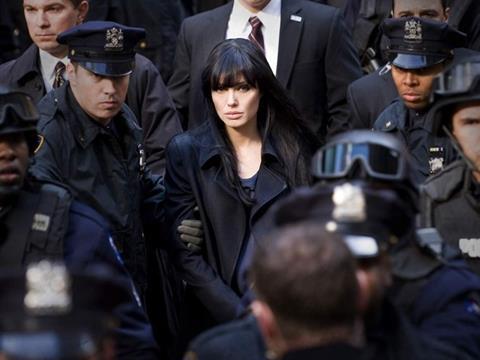 Salt’s CIA agent heroine may be able to don ingenious disguises to outwit her pursuers, but this shop-worn Angelina Jolie action-thriller has less success in its attempts to masquerade as a successor to the Jason Bourne franchise. Director Phillip Noyce’s return to major-studio filmmaking after a decade of smaller dramas maintains a workmanlike competence throughout but lacks the diabolical smarts and inspired chase sequences that distinguish the best contemporary spy films.

Salt recycles tired genre tropes: overly elaborate, high-pressure missions; a resourceful hero who can use anything within reach to fend off her adversaries; and nefarious foreign villains plotting global mayhem.

Opening July 23 in the US, Salt will expand across the globe through late summer and early fall. This Sony release will have to contend with Inception for dominance amongst the action-thriller crowd, but considering Jolie’s proven track record of late with Wanted and Mr. & Mrs. Smith, which both amassed 60% of their total gross overseas, Salt might be able to at least hold its own.

Tough-as-nails CIA officer Evelyn Salt (Jolie) watches her life get turned upside down when a Russian defector visits her office to announce that Salt’s a double agent for the Russians. Once her colleagues begin to question her loyalties she must go on the run to clear her name.

Noyce came to prominence in the 1990s directing two Tom Clancy adaptations, Patriot Games and Clear And Present Danger, which were solid but dry espionage films. After helming 1999’s The Bone Collector, which starred Jolie, he turned his attention to more character-driven dramas like The Quiet American and Rabbit-Proof Fence. Sadly, his renewed interest in mainstream fare merely finds him again overseeing a lacklustre tromp through action-thriller conventions.

With a screenplay by B-movie auteur Kurt Wimmer (Ultraviolet), Salt recycles tired genre tropes: overly elaborate, high-pressure missions; a resourceful hero who can use anything within reach to fend off her adversaries; and nefarious foreign villains plotting global mayhem. The film’s predictable qualities do have a certain comfortable familiarity to them, but unfortunately the story is so littered with questionable logic – not the least being why Salt’s fellow agents immediately suspect her of subterfuge – that it diminishes audience interest in her dilemma.

More fatal, Salt’s relentless super-heroine and high-tech intelligence gadgetry feel like pale echoes of the Jason Bourne films, which raised the bar for the genre by insisting on a breathless pace and inventive plotting. Noyce tries to mimic those movies’ adrenalised pulse in chase sequences involving trucks, motorcycles and precarious heights, but his stolid style mutes most of the visceral thrill such moments could elicit.

While Salt could be commended for featuring a strong, independent woman as its main character, any nod to gender equality loses its lustre when one considers that beyond her prowess in fight sequences Salt doesn’t register as much of a presence. Jolie provides her usual fiery urgency, but she’s coasting on persona and an attractive physique to sell a drab character.

The rest of the cast reinforces Salt’s general vibe of dull professionalism. Liev Schreiber and Chiwetel Ejiofor are superb actors, but watching them struggle to lend believability to roles as stock CIA company men is to wish that they could find more meaningful work to showcase their talents.