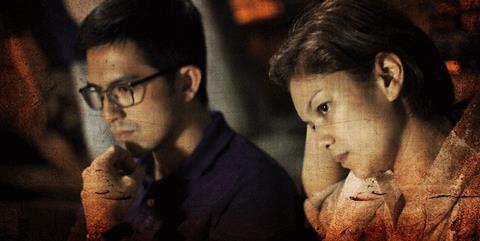 An intriguing experiment in melding news media criticism and occult horror, Sapi conjures up plenty of unease but doesn’t have much in the way of story or character to drive its message home. The latest film from Filipino director Brillante Ma Mendoza (Serbis) features his trademark moments of shock value — including snakes emerging from sensitive body crevices — but while Sapi is meant to be a serious examination of modern journalism, its lack of bite is matched by its overextended running time.

Sapi gets a surprising amount of mileage out of deeply unsettling the viewer, even if there are few rooting interests on screen.

Screening in the Vanguard section of the Toronto Film Festival, Sapi will probably perform similarly to Mendoza’s other movies, appealing to festival audiences but only offering limited theatrical prospects. However, the movie’s horror trappings could cater to genre fans, although there’s more atmosphere than gore to be found here.

Set in Manila, the film tracks the rivalry between the city’s two big news channels, PBC and SBN. With dangerous storms and flooding going on, both channels are on the hunt to break a story about a woman who is said to be possessed by the devil. (After all, it’s a ratings bonanza.) But when PBC gets the woman’s satanic possession on tape, SBN’s competitive fledgling producer Meryll (Meryll Soriano) buys leftover footage from PBC’s unscrupulous cameraman (Baron Geisler) for their program, unknowingly unleashing a mysterious dark power in the process.

From the outset, Sapi signals that strange things are afoot. Not only are there frightening amounts of lightning ping-ponging across the sky, but also weird occurrences keep happening, including the bizarre reincarnation of a dead dog run over on the road. Mendoza puts us on high alert but keeps us wondering where the horror will emanate: The storm? Or from the unexplained visions and spooky disembodied whispering that torment the SBN news team?

Incorporating handheld camera and a presumably intentionally unflattering lighting scheme, Mendoza and his co-cinematographer Jeffrey Dela Cruz create a world in which dread seems to hang heavy in the air at all times. The queasy visuals are perfectly in keeping with the filmmaker’s portrait of a sick society ruled by greed and yet at the mercy of nature (in the form of gargantuan snakes) and otherworldly terrors such as demonic possession.

Unfortunately, Mendoza’s attacks on the shallowness of ratings-driven news coverage draw little blood. The characters at both channels seem typical of their profession without exhibiting anything particularly upsetting or scandalous in their behaviour. Consequently, it’s hard to summon up much schadenfreude when Meryll and her associates begin to be plagued by scary invisible spirits that may or may not be connected to their theft of the possession footage.

With that said, Sapi gets a surprising amount of mileage out of deeply unsettling the viewer, even if there are few rooting interests on screen. Mendoza allows his condemnation of the news media to become repetitive, but his subtle scares — occasionally punctuated by crude but effective shocks involving copious blood or imagined suicides — start to enter the audience’s blood stream. It would be inaccurate to call Sapi frightening, but it has a commitment to its slithering anxiousness that’s commendable.

Nonetheless, this emotional effect can only work so well when Mendoza’s characters are drawn so dully. Soriano plays Meryll without much range, showing little of the blinding ambition that could make her comeuppance dramatically interesting. Dennis Trillo, who plays SBN’s promising young on-air talent, is equally blah, more a helpless victim than a deserving target for oncoming havoc. Watching Sapi, one is tempted to presume that Mendoza worked out his anger about TV journalism’s cravenness in metaphorical terms but never bothered getting down to cases. The movie puts you on edge, but not for any compelling reason.