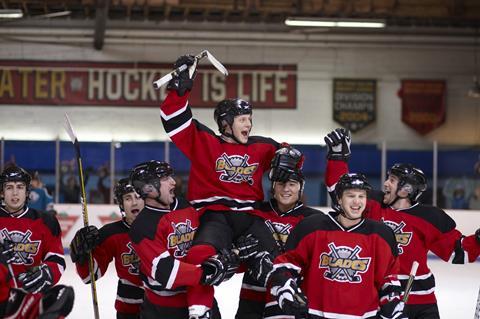 Imagine a teenage romance with an ice hockey backdrop and a template that conforms to the hit television series Glee and you have the elements of Score: A Hockey Musical, the curtain raiser at the Toronto International Film Festival.

There’s admittedly an initial shock when the rag-tag group of hockey players first burst into song.

While the film may prove to be a crowd pleaser at its premiere, its provincialism as well as essentially unmemorable music and an oh-too familiar dramatic arc bode ill for this unconventional entry. There’s no question that the filmmakers are relentless when it comes to shots on goal but the puck too rarely enters the net.

The yarn centers on 17 year-old Farley Gordon (Noah Reid), a home schooled lad who’s a natural talent on ice. However, he’s only played the game for fun with chums. That changes when the owner of a semi-pro team stumbles upon him in action and conscripts the boy to play over his parent’s acute reservations.

Eve (Allie MacDonald), literally the girl next door, has romantic intentions for Farley who’s only seen her as his best friend. The plot turns on discovering his true feelings and on rectifying his pacifist attitudes with the sport’s innate physical violence. The latter harkens back to The Four Feathers with the protagonist’s refusal to take the challenge of a dropped glove earning him the ignoble receipt of “girlie skates” encrusted with appliqué.

There’s admittedly an initial shock when the rag-tag group of hockey players first burst into song and an uninspired bit of choreography at the rink. But the conceit is quickly appreciated thanks to vintage musicals and the recent success of Glee. What’s more problematic are the songs that virtually to a fault have a sameness that proves to be more function than form. The lyrics (supplied by writer-director Michael McGowan) strain to find rhymes that fit such words as “stratospheric” and “saliva.” The results are more often groan-inducing than clever badinage.

The best tunes are Rush’s 1987 hit Time Stand Still recorded by Nelly Furtado (who’s unrecognisable in the film as a raucous fan) that’s sung over the end credits and Finale, with the refrain “Hockey’s the greatest game in the land” that recalls the stirring Three Lions recorded by England’s winning bygone football team of the 1990s.

One might also have hoped for something more substantive from Olivia Newton-John who plays Farley’s mother but she’s offered less than Xanadu quality material. Others, less versed in the musical realm, manage a passable talk sing. And leads Reid and MacDonald are unquestionably appealing and smooth the surface ahead of the Zamboni (rhymed appropriately in the film with “baloney”).

The choreography is largely perfunctory and might have better been served under the direction of Frank Carroll who coached Olympic champion Evan Lysacek.

Team sports rarely figure into musicals with the Faustian spin accorded Damn Yankees the most memorable in theatrical lore. When the hapless baseballers of that classic begin to trill “You’ve Gotta Have Heart” something electric occurs to redeem the nonsense. Score: The Hockey Musical has plenty of heart but regrettably suffers from an absence of soul.