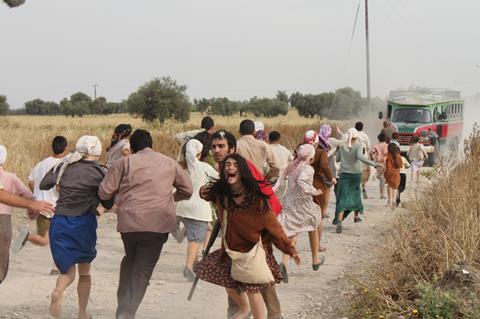 Playing the Istanbul festival in an out of competition slot after having collected most of the awards at the Ankara Film Festival, Dervis Zaim’s fifth feature film Shadows And Faces (Golgeler veSuretler) seems a likely candidate for international festivals on the lookout for humanistic political messages rooted in real contemporary events.

The plot could bear some more development and the same goes for the single-minded, rather thin, characters.

Far more accessible and less overtly ambitious than his two previous efforts, Waiting For Heaven and Dot, Zaim’s take on a 1963 incident in his native Cyprus prior to the political split of the island follows the inevitable process developing in every international skirmish, starting with best intentions and leading, through paranoia on the one hand and extreme chauvinism on the other, to mass bloodshed and violence. Put in these terms, the plot is easily translated into any of the other ethnic conflicts raging around the world these days and therefore potentially familiar to large audiences.

Salih (Erol Refikoglu) a Karagoz shadow play master and his daughter Ruhsar (Hazar Erguclu), driven away by the Greek police from their home in a small Cypriot village, go to their relative Veli (Osman Alkas) in the next village, looking for a shelter. Veli, the elder statesman of the Turkish community there, believes he can appease the mounting tension between Greeks and Turks by keeping a low profile and refraining from any act of aggression that might annoy the better equipped and numerically superior Greeks.

He is supported by his neighbor, the local innkeeper, Anna (Popi Avraam), who tries to calm down her own people, most particularly her hot-headed son, Thanassis (Pantelis Antonas), who hates Turks with a passion. If things do not work out, it is only because fear and suspicion are always stronger than reason.

Thanassis sees a few guns being dug up by young Turks in Veli’s garden, then the Greek police bring in a whole load of weapons which they plant in Anna’s house despite her protests. The Turks notice and start training in secret with their antiquated rifles, with Veli losing control over the young Turks who believe they should be the first to attack before it is too late. The Greeks retaliate and the inevitable occurs - two innocents (a simpleton and a bus driver are killed) and the violence escalates with the Turks are forced to leave everything behind and run for their lives.

In a parallel plot, Salih and Ruhsar attempt to find their way to the nearest town, the old man disappears and the girl returns to Veli’s place, hoping she will get some help to find her father but ultimately has to escape with the compatriots.

An ominous warning on the nature of man in general is sounded, through the shadows theatre, in the opening and again the closing sequence of the film, with Zaim using shadows all through as premonitions for bad things to come.

He obviously intends this as a fair universal metaphor and is most likely to be accepted as such though Greek audiences might protest against their being the villains of the piece, their characters ranging between well-meaning and purely evil, while the Turks fill up the other end of the scale, from well-meaning but unwise all the way to downright victims.

The plot could bear some more development and the same goes for the single-minded, rather thin, characters. Don’t expect to learn much about the ethnic animosity in Cyprus in this film, but you might find in it many parallels to similar tragic incidents in your vicinity.