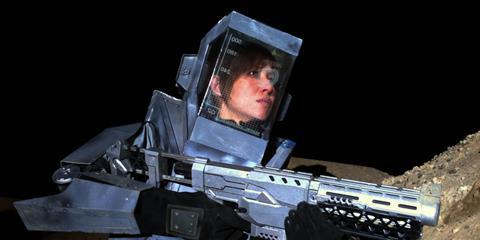 Writer-director Jay Weisman ambitiously sets his debut feature on the dark side of the moon.  He also puts his entire cast in spacesuits for the bulk of their screentime, so they have to act from behind thick glass helmet-panes.  It’s a rare future war scenario in which the human race isn’t fighting aliens but has schismed into new factions in battle with each other. The film had its world premiere at London’s FrightFest film festival.

The dialogue offers a few sci-fi-flavoured gems (‘hey, have you ever groinlocked with a Fear Monk?’), but is mostly earnest and circular.

An awkward set of expositionary captions and dialogue exchanges establish that in the future, most of Earth’s usable water is poisoned and so the Unlight (fanatics who have banned religion) have come to the moon to fight the Banished (exiles who adhere to weird combined faiths) over sublunar pockets of ice.  In this future, gods are outlawed, so the faithful worship outlaws … and, in a sneaky development that might play to American conservative prejudices, atheists act (and dress) like the Inquisition.

Despite all the backstory, the film is mostly a lost patrol scenario with five grunts surviving the shooting-down of their transport vehicle and yomping across the gloomy moon in the hope of reaching a safe domed settlement.  Early on, one soldier complains that they’d get saved quicker if they ‘bounced’.  The explanation of why this tactic isn’t employed sounds a tad hollow, prompting a suspicion that the real reason is that the production can’t run to the wirework needed to depict the moon’s low gravity.

There are bursts of well-realised action, but the film keeps stopping for long talks about religious purpose, war crimes and future history which are literally muffled by the spacesuits and are less engrossing than the simple business of survival in a hostile environment.  The dialogue offers a few sci-fi-flavoured gems (‘hey, have you ever groinlocked with a Fear Monk?’), but is mostly earnest and circular.

The natural darks of the setting is compounded by the murkiness imposed by a scarcely-needed 3D process – this will play better flat and on home screens than in the cinema, harking back in style to such VHS-era science fiction action movies as APEX or Prototype.  Typical of the film’s vagueness is the use of a title that sounds like two titles arbitrarily shackled together.