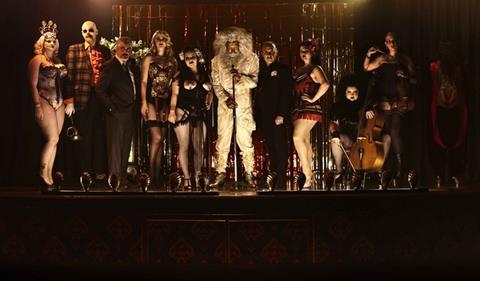 An ongoing collaboration between the photographer Mitch Jenkins (who directs) and the comics writer Alan Moore (who scripts), this collection of three crowd-funded shorts was screened at London’s FrightFest as a brief feature.  It seems to be just the beginning of a longer work that will explore ‘Nighthampton’, a realm that exists ‘when Northampton goes to sleep’.

An intensely personal project, supported (not least financially) by Moore’s loyal fan following, this treats each short like an issue of an ongoing comic book series.

Nighthampton also overlaps with the afterlife and is home to a distinctively British spin on the red-curtained night-spots in another dimension which recur in the work of David Lynch.  Characters carry over from film to film, though modes of narrative vary, elements are set up and left dangling (presumably to be revisited in later installments) and there’s more atmosphere than event.

‘Act of Faith’, the first segment, offers the nearest thing to a conventional narrative.  Journalist Faith (Siobhan Hewlett) prowls around her flat, elaborately dressing and making herself up while arranging for a fetishist encounter involving the fantasy of being rescued from an auto-erotic accident by a paramedic.  An adult conte cruel in the mode of Roald Dahl, this anecdote hints that Faith’s work – exposing a recently-deceased hypocrite – will play a bigger part in a later tale, but concentrates on her situation, which is presented in minute, uncomfortable detail.

‘Jimmy’s End’ and ‘His Heavy Heart’ fit together more neatly, with melancholy pub-crawler James (Darrell D’Silva) somehow drifting into an outmoded boozer where Faith is among the near-catatonic patrons.  James is buttonholed by Matchbright (Robert Goodman), one-half of a sundered double act with Metterton (Moore) whose disturbing catch-phrase is ‘doctor, we’re losing him’.

Matchbright and Metterton are showbiz magicians but also underworld figures, with Matchbright channelling the Steven Berkoff school of movie gangsterism while Metterton – filmed mostly like Jesus in a 1950s Biblical epic, seen from behind or in close-ups of his shoes – is a more startling, gold-facepainted figure.

Also in the joint is Bobbles the Clown (Andrew Buckley), a vicious, self-hating character – who might remind some that in his earlier career, Moore reinvented the Joker and invented the Comedian (from Watchmen) – who ushers James into the next short, which includes an encounter with Apophis, the Egyptian eater of the dead, and reveals more about Nighthampton.  Besides the Lynch nods, there’s an influence from other comics creators who have worked in movies, including Alejandro Jodorowsky and Dave McKean.

An intensely personal project, supported (not least financially) by Moore’s loyal fan following, this treats each short like an issue of an ongoing comic book series – it benefits from strong performances, whether shell-shocked like Hewlett or D’Silva or expansive with Moore’s fanciful talk like Goodman and Buckley.  That it’s as bewildering as it is beguiling is as much down to the essential nature of the vision as it is the fact that it’s a work in progress.