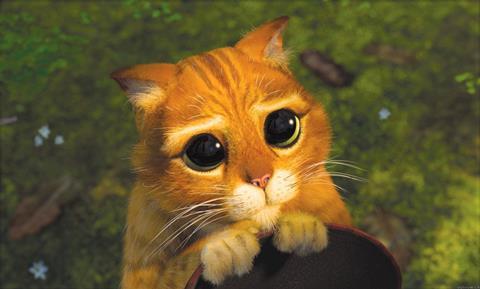 It is not often that ananimated film gains a Competition berth at Cannes, and unprecedented that its sequel should be invited back to challenge for the Palme d’Or two years later. But Shrek was no ordinary animated film, and Shrek 2 is, rarer still, proving every bit as cute, clever and funny as the original.

The clear stand-out is Puss in Boots, who elicits the film’s two biggest laughs, not with a line of dialogue but by his facial expression

This time around thefilm-makers have been smart enough to fashion new characters and a freshstoryline, without forgetting what made their first film such a charmer (unlikethe equally adorable Babe, whose makers essentially consigned theirprize pig to the slaughterhouse with the sequel’s roster of creepy new facesand drastically different tone).

DreamWorks SKG is sitting onan all-media goldmine. The first Shrek grossed $267m domestically and awhopping $455m worldwide ’ and the new film promises to do at least as wellafter it is released in the US and elsewhere from this week. Ancillary shouldbe huge: the original films has sold around 40 million units worldwide on DVDand video. Meanwhile Shrek 3 is already in production, scheduled forrelease in 2006, with work already begun on a fourth film.

Shrek 2 finds the title character (voiced again by Myers)and his new bride, Princess Fiona (Diaz), returning from their honeymoon tofind an invitation from her parents, King Harold and Queen Lillian (Cleese andAndrews respectively), who want to meet their new son-in-law. Fiona is excited;Shrek is apprehensive, aware that a giant green ogre is not what most parentsenvisage for their daughter.

With Donkey (the inimitable Murphy) joining them, the newlyweds journey 700 miles to the aptly-named Kingdom of Far, Far Away. It turns out that Shrek’s fears are well founded.While the queen accepts her new son-in-law, the king does not. He turns to thepowerful Fairy Godmother (Jennifer Saunders) for help.

She is only too happy to comply, since her own future is predicated upon the marriage of her son, thenarcissistic Prince Charming (Rupert Everett), to the Princess. Fairy Godmotherenlists the services of Puss in Boots (a delightful Banderas), legendary slayerof ogres.

The jokes and sight gags,some wonderfully subtle, keep the laughter level high throughout the movie.While nothing can top the singing birds that puffed up so big they exploded inthe first film ’ and the subsequent shot of Fiona cooking fried eggs ‘screenwriters Adamson, Stillman, Stem and Weiss have come up with some realgems here.

As before, the humour isrooted in character, story and clever tweaking of everything from fairy talesto Hollywood (The entrance to the Kingdom of Far, Far Away, as one example, is the spitting image of the famous Paramount studio gate).

Once again, Myers, Diaz and Murphy give flawless vocal performances. And while all the new characters (andactors) slide nicely into place, the clear stand-out is Puss in Boots, who elicits the film’s two biggest laughs, not with a line of dialogue but by his facial expression. In what can only be described as an extraordinarycollaboration between voice talent and animators, Donkey and Puss all but stealthe show.

The most important has to dowith something called a ‘bounce shader’, which affects how both the charactersand the set are lit. It is evident not only in the appearance of the humancharacters but also in the extraordinary reproduction of wet fur when Donkeyand Puss get caught in the rain.

If these new, sophisticated animation techniques are any indication of what audiences can expect from SharkTale in the autumn, this will be a banner year for PDI. One thing isalready clear: Shrek 2 will be delighting audiences all summer.