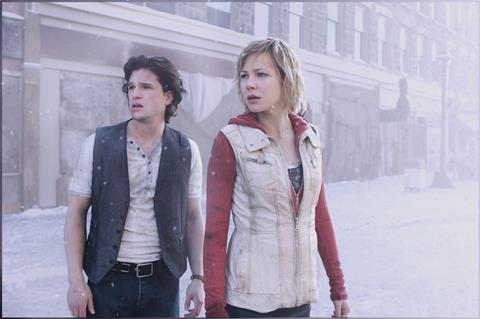 A cheap, clunky sequel to 2006’s videogame adaptation Silent Hill, this programmatic follow-up goes through all the genre motions with the passion, commitment and attention to detail of a teenager cycling through a laundry list of mandated chores prior to an evening out. A frenzied and narratively muddled cash-grab that disimproves upon its predecessor in every imaginable way, this uninspired effort may represent the theatrical release death knell for the franchise.

Facing a buzzsaw of theatrical genre competition in the form of Sinister and Paranormal Activity 4, and with little to attract those outside of the videogame series’ most ardent fans (the movie did not screen for critics in advance of its Friday opening in the US), revenue should lean heavily on ancillary income and foreign markets, the latter of which accounted for 52 percent of the original movie’s $98 million box office haul.

Years after the events of Silent Hill, which saw her rescued by her mother Rose (Radha Mitchell), Heather (Adelaide Clemens) settles down into yet another new town with her father Harry (Sean Bean). They’re constantly on the move, for reasons she thinks are related to a self-defense homicide on the part of her father, but on the eve of her 18th birthday, Heather discovers the true source of the horrific nightmares that plague her.

Cursed by a demonic child to a perpetual gloom and darkness populated with monsters, the remaining residents of a West Virginia mining town have coalesced into the Order of the Valtiel, and they believe only Heather’s presence (and sacrifice, it’s intuited) can break their spell and set them free. With help from Vincent (Kit Harington), a fellow new kid at school, Heather travels to Silent Hill to try to save her kidnapped father.

As with the first movie, its grungy, effective set design is amongst Revelation’s strongest selling points. Particularly as it wears on, the lighting, colour and textures reflect a haunted carnival hellscape, with ash-ridden skies. A creepy sequence in a warehouse full of mannequin parts is probably the movie’s best scene, giving way to an attack by a spider comprised of the same.

Absent the presences of originating writer Roger Avary and director Christophe Gans, though, Revelation feels an infinitely more clubby and insular affair than its predecessor (co-producer Laurent Hadida even takes a strange “adapted by” credit), desultory and dependent on a rabid and uncritical emotional investment rooted in the source material. Whereas the first film blended fever-dream style with a somewhat pragmatic and certainly more relatable storyline, the plotting here feels frequently arbitrary — a collection of characters from the first movie and some monsters from the game series, strung together in risible fashion by chunks of clunky exposition.

Writer-director Michael J. Bassett never establishes a fully fleshed-out outside world, or links between these “layers of realities” that characters prattle on about (a silly physical knick-knack, the Seal of Metatron, which links Heather to the Valtiel and central demon, is used subjectively, and doesn’t work).

When not contradicting its own logic (its assertion that Heather enter Silent Hill of her own free will stands in direct contrast to a flashback assault), most scenes are rotely imagined, insipidly staged, or both. The few that are not — the aforementioned spider sequence and a surreal bit with some faceless, cleaver-wielding nurses — feel untethered to the main story.

Carrie-Anne Moss gives off a suitably chilly vibe in her brief appearance as a villainess, but Malcolm McDowell hams it up in a scene as imprisoned asylum patient.

Australian-born Clemens is the movie’s sole bright spot. She’s a good match for Mitchell, the star of the first film who only cameos here, even though Clemens plays her adopted daughter. With her short blonde hair and sympathetic visage, she resembles a cross between Michelle Williams and Carey Mulligan, exuding an ever-present vulnerability that stands head and shoulders above this claptrap.

Apart from a small handful of shots involving forced perspective and weapons thrust toward the screen, the movie’s 3-D presentation is inessential, and a plot to squeeze out a few more dollars from fans.

Screenplay: Michael J. Bassett, based on the videogame created by Konami, adapted by: Laurent Hadida