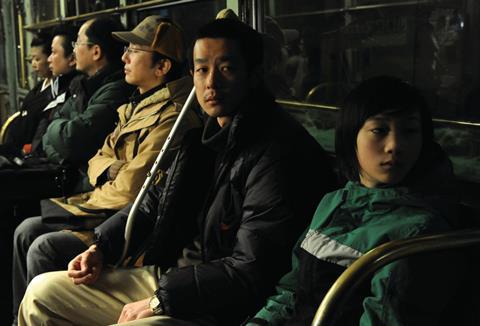 There is a beautiful bleakness to talented director Kazuyoshi Kumakiri’s Sketches Of Kaitan City, but despite a series of powerful performances and some memorable dramatic moments its string of downbeat and only vaguely interlinked stories just can’t sustain the hefty running time.

There this no denying that the film is extremely well made – and was warmly received at its Tokyo public premiere screening – and could well interest festivals and TV buyers.

But it remains an unusually rich and assured film as it details the gloomy lives and would-be loves of a series of largely unhappy ordinary folk living in the fictional port city caught in the dual grip of a bitter winter and an unforgiving recession.

The film, which received its world premiere at the Tokyo International Film Festival, is based on an anthology of short stories by the late writer Yasushi Sato (though the film uses five of the possible selection of 18 stories), and while the dramas of sad and ordinary lives are well told, the sheer unrelenting sense of brooding unhappiness cries out for just a touch of warmth or humour.

But there this no denying that the film is extremely well made – and was warmly received at its Tokyo public premiere screening – and could well interest festivals and TV buyers looking for a contrast to the more usual style of Japanese cinema.

The film opens engagingly enough with its tale of an old woman whose ramshackle house lies just at the spot where builders want to develop. She refuses to sell…her cat leaves her…and the builders start work in any case. Other stories include that of a siblings laid off from work; a planetarium worker unable to talk to his son who ineptly and angrily tries to find his hostess wife, only to drive into a snowdrift, and the young owner of a gas supply company who hits his new wife just as she hits his son.

The second part of the film – especially the section about the wife-beating gas fitter – are more stark and dramatic than earlier more doleful episodes, and at least has a much needed sense of drama. The nearest thing to warmth and affection comes in the final scene as the old woman sits on her porch as the contraction site rumbles around her, only to have her newly pregnant cat return. She lovingly strokes the cat’s pregnant stomach….finally a moment of love in depressing Kaitan City!

Screenplay: Takeshi Ujita, based on the short stories by Yasushi Sato