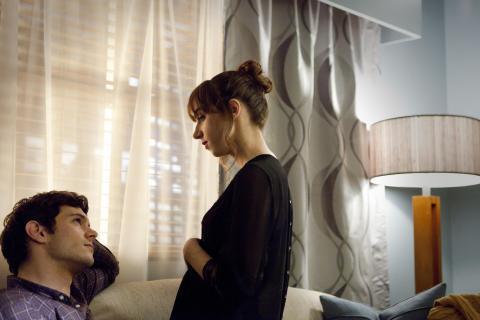 A classy and beautifully performed screen adaptation of Neil LaBute’s stage play, Some Girl(s) is an astute and provocative drama about the perils of relationships and messy breakups in particular. Driven by a series of strong performances it veers into dark areas at times, but the episodic nature of the story keeps things fresh and intriguing.

Emily Watson and Zoe Kazan are especially impressive (though they have the meatier and more dramatic roles), while Kristen Bell handles the nuances of her role with ease.

Directed with style by Daisy von Scherler Mayer (who made Madeline and The Guru), the film starts relatively sedately as it follows a successful writer (Adam Brody) on the eve of his wedding as he criss-crosses the country, meeting up with ex-girlfriends in an attempt to make amends for past relationships and the issues that ended them.

His first assignation is with now-married Sam (Jennifer Morrison) in Seattle, a girl friend from schooldays; his second with sexually free-spirited Tyler (Mia Maestro) in Chicago; his third with married college professor Lindsay (Emily Watson) in Boston; his fourth with his former best friend’s little sister Reggie (Zoe Kazan) back in Seattle, and finally with “the one that got away”, Bobbi (Kristen Bell) in Los Angeles.

Sam is a gentle soul with fond memories of their time together; Tyler would be up for an affair – claiming “no harm, no foul” – while Lindsay is still angry with him, especially since his book The Calculus Of Desire obliquely mentions their affair and what happened. And is even more annoyed when he mentions the movie rights have been sold, though has her own plans for a form of revenge.

The film reaches is dramatic peak when he meets with Reggie, whose character did not feature in LaBute’s original production. She is a 26 year-old journalist, but had an encounter with him (unnamed) on the eve of her 12th birthday when he slept over at her family home. He tells her he thinks it was a simple kiss…but she stares at him as says: “Do you remember touching my ass?”

She adds:” You were a man…you knew what was going on…it was not right doing that to me.” It is a powerful and disturbing sequence, and to a certain extent takes the dramatic sheen off the final encounter who toys with him a little, but also takes him to task for his behaviour towards her, calling him an “emotional terrorist,” while he thinks of himself as an “fearless cartographer of the soul,” when she unearths that he is only talking the women for an article.

Emily Watson and Zoe Kazan are especially impressive (though they have the meatier and more dramatic roles), while Kristen Bell handles the nuances of her role with ease. Adam Brody to a degree has a thankless role – his character is quite simply a cad and a bounder (though a fruitier description would be better) and he can do little but use a little charm to balance against his manipulative behaviour.

The simply staged backdrop is a series of hotel rooms, with the sequences interlinked by shots of aircraft and airports, with Daisy von Scherler Mayer wisely never attempting to open up the story and allowing its stage-bound origins be centre-stage.