In a show of mass solidarity not seen since the Screen Quota protests nearly a decade ago, 74 South Korean film industry groups together held a press conference today (Feb 13) in Seoul to protest recent encroachments on freedom of expression. 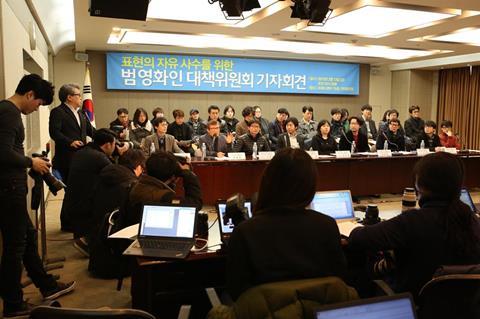 They stated they were moved to action because of the following infringements on the film industry’s independence, autonomy and freedom of expression:

The coalition warned: “If, even after this press conference, all attempts to damage the priceless values of freedom of expression, independence and autonomy don’t die down, we will no longer sit by and watch.”

They stated categorically: “We won’t stop at pan-film industry and pan-culture industries but will organize pan-citizens’ solidarity and make the utmost efforts to guard freedom of expression, a value guaranteed in the Constitution.”

Question for the mayor

They posed a public question to Busan mayor Seo Byeong-soo, demanding to know if he would clearly declare that he would “definitely guarantee the Busan International Film Festival’s independence” and autonomy, and not interfere or try to influence its programme selection.

They ended with a public request for a face-to-face talk with Minister of Culture, Sports and Tourism, Kim Jongdoek, regarding all these events.

In recent weeks, film festival heads including Rutger Wolfson of the International Film Festival Rotterdam and Dieter Kosslick of the Berlinale have sent messages of solidarity.