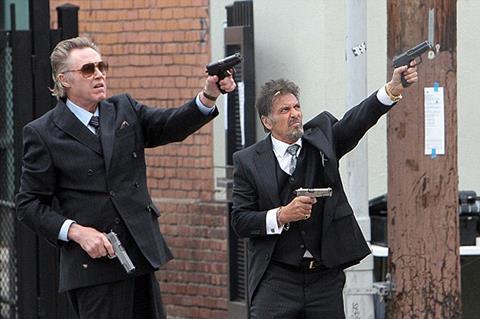 A whimsical, half-formed paean to criminal fraternity, Stand Up Guys brings together Al Pacino, Christopher Walken and Alan Arkin as retired gangsters who, against the backdrop of an impending assassination, reunite for a wild night of drugs, booze and women, with a sprinkle of reflection on aging and loyalty. Its synopsis may summon contemplations of a gangland Grumpy Old Men, but the first produced screenplay of playwright Noah Haidle, unfolding over the course of one night, cycles through too many haphazard and improbable set-ups to amount to anything more than a collection of signed offer sheets in search of a movie. This is the shaggy, cinematic equivalent of a greatest-shtick collection, dragged into watchability only through the lively interplay and accrued goodwill of its leads.

Pacino tackles the lascivious Val with a gleeful abandon, variously recalling his characters from Scent Of A Woman and even (a bit) The Devil’s Advocate. Walken and Arkin, meanwhile, well… they’re rascally and dryly sardonic.

Receiving a targeted limited release on around 700 screens from distributor Lionsgate, Stand Up Guys will do most of its business on home video, where strong affinity for its cast will give it solid business and a healthy shelf life.

When Val (Pacino) gets out of prison after almost three decades, his old friend Doc (Walken) is there to pick him up. Unfortunately for Val, their old crime boss, Claphands (Mark Margolis), still holds him accountable for the death of his son, and has given Doc an ultimatum: kill Val, or be killed.

Instead, Doc takes Val to a diner, where they’re doted over by his favorite waitress, Alex (Addison Timlin). Val’s sexual appetite is undiminished so they visit a homey brothel presided over by second-generation proprietor Wendy (Lucy Punch), and then decide to break their shared pal and former wheelman, Hirsch (Alan Arkin), out of his nursing home. With Claphands’ deadline looming, booze, Viagra, fisticuffs, a car chase and a return trip to the brothel all ensue, and that’s not even including the revenge assistance the men decide to lend to a battered woman (Vanessa Ferlito).

Somewhat reminiscent of The Bucket List or The Maiden Heist (which starred Walken, Morgan Freeman and William H. Macy), Stand Up Guys ripely embodies a certain subset of movies — call it the “Raging Aging” genre — which just leans on older characters doing things associated with younger people for its story.

The basic conceit is preposterous for any number of reasons, but not insurmountably ludicrous. What’s perhaps most disappointing, though, is the serial awkwardness with which it melds its somewhat forced action comedy and melancholic recollection (perhaps a function of its compressed timeline). Haidle’s stage roots come through here, as this story could seemingly be better handled in that format; as a movie, the various returned-to locations start to feel contrived.

With apologies to William Shakespeare, the actors are the thing here, and all three spin mostly enjoyable iterations of previous performances. Pacino tackles the lascivious Val with a gleeful abandon, variously recalling his characters from Scent Of A Woman and even (a bit) The Devil’s Advocate. Walken and Arkin, meanwhile, well… they’re rascally and dryly sardonic. In contrast, young Timlin makes a solid impression as Alex.

Actor turned documentary producer Fisher Stevens, helming his second fiction feature and first in a decade, understands his movie’s core appeal. Working with cinematographer Michael Grady, Stevens delivers a movie cloaked in shadows, and whose framing and close-ups are all designed to spotlight the actors’ weathered but dynamic faces.

If the movie’s purposefully indefinite ending — a nod to one of cinema’s more famous headlong rushes into peril — essentially authenticates the reading of it as nothing more than a shrugging star showcase, Jon Bon Jovi’s “Not Running Anymore,” which nabbed a Golden Globe nomination for Best Original Song, plays over the end credits, also underscoring Stand Up Guys’ swollen sentimentality.