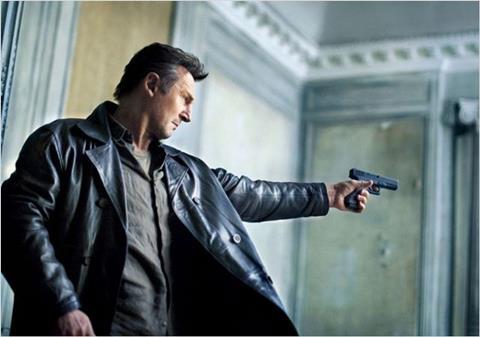 The “Hey - wait a minute’s” set in well before the closing credits roll, but while it’s unspooling, Taken 2 hangs together slickly enough to provide an entertaining, action-packed slice of distraction. Working with co-screenwriter Robert Mark Kamen, Luc Besson reinforces his supremacy as filmdom’s leading employer of actors who look like non-Western thugs, while director Olivier Megaton puts a preternaturally assured yet feeling-his-age Liam Neeson through his mellow-yet-lethal paces as Bryan Mills, the guy whose “skill set” is bad news for bad guys.

As in recent Besson-produced English-language action flicks From Paris With Love and Colombiana, local law enforcement seems to go on holiday for the film’s running time.

Where “only” Kim (Maggie Grace) - Mills’-and-ex-wife Lenore’s (Famke Janssen) daughter -  was “taken” in the original, here the whole family gets abducted while in endlessly colourful Istanbul.  In conjunction with a tribute to Neeson, the film premiered in Deauville on September 7, prior to hitting much of the rest of the world the first week in October. Solid international box office seems assured.

With Megaton succeeding Taken director Pierre Morel, Taken 2 is a free-standing entity although it certainly doesn’t hurt to know that, two years prior, fearless ex-CIA operative Mills killed a bunch of Albanian human traffickers in Paris while rescuing kidnapped Kim from her ordeal.

At the outset we learn that white slavers have feelings too, as grief-stricken Albanian patriarch Murad (a well-cast Rade Serbedzija), surveys the repatriated coffins holding Albanian menfolk done in by Mills and swears revenge.  When Murad and his henchmen learn that Mills will be working as a bodyguard for a visiting Middle Eastern dignitary for three days, they relocate from Tirana to Istanbul.

Lenore relationship with the guy she remarried is on the skids, so she and Kim accept Bryan’s offer to join him in Turkey for a post-work family vacation. When you’ve got enemies like Murad, maybe that’s not such a good idea. The Albanians don’t just want revenge - they want ultra-revenge, and endless ranks of Turks-for-hire are itching to help.

The script’s strength is that it presumably knows it’s ludicrous and yet takes the trouble to establish motivations, attitudes and skills that all intersect with fast-paced verve.

It must be said that Mills’ persona is very appealing and that Neeson plays him absolutely straight. Since we would all like to believe that somebody with a soothing voice will rescue us if we end up chained upside down with a small slit in our neck to bleed to death - “It’s going to be allright,” intones Mills to fellow captive Lenore, although he’s shackled out of reach in a creepy Istanbul torture den - there’s a surprisingly effective emotional undercurrent to the proceedings.

In Megaton’s able hands, Istanbul is a really cool place for Albanians and Americans to chase each other with malicious intent.  Neeson, now 60, more than holds his own in the fight choreography.  While Mills has a few nifty gizmos, he mostly outsmarts his adversaries with brainpower.  It’s all simultanously far-fetched and yet kind of ingenious.

As in recent Besson-produced English-language action flicks From Paris With Love and Colombiana, local law enforcement seems to go on holiday for the film’s running time. It’s as if there’s a travel brochure that says “Come to Istanbul and kill people - we don’t mind!”

The otherwise overprotective Mills’ parenting style includes urging his daughter to drive in front of a speeding freight train. (Perhaps the most unbelievable aspect of the story is that college student Kim lives in Los Angeles but she hasn’t passed her driver’s license test yet.)

If anyone’s keeping track, it is worthing noting Taken 2 offers the most novel method to date for entering a US Embassy.