Tales Of The Night 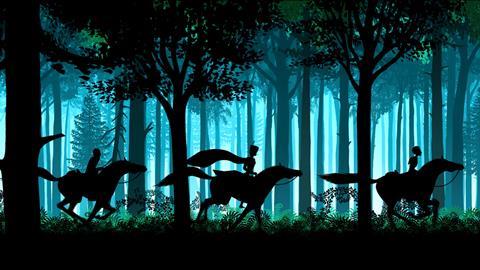 In Tales Of The Night, French animation master Michael Ocelot returns to the same format as his 2000 film Princes And Princesses (Princes Et Princesses), itself a compilation of short fairy tales in silhouette from his short-lived 1989 TV series Cine Si. The six new short stories possess plenty of the charm, wit and visual boldness for which his films are celebrated, but only newcomers to Ocelot’s work will be filled with wonder. For aficionados, there is very little fresh here and even some of the tales feel like rehashes of his previous work.

Each setting is gorgeously rendered and the backgrounds and colours are stunning.

Ocelot’s fame should make the film a success in France when it opens in July and international sales will be strong, especially to buyers who took Azur Et Asmar (2006) or the Kirikou films; Ocelot’s DVD and TV value is timeless, and easily suited to redubbing in local languages.

In an age of multiple thousand screen releases for Pixar and DreamWorks titles, however these classical Tales are bound to find a niche in the specialised arena. The portmanteau nature of the concept and the silhouetted characters will hamper the chances of a wide acceptance among kids used to the digestible longform and easy visuals of Toy Story 3 and Tangled.

The film is presented in 3D, although for a film told with silhouettes, the device doesn’t add much visual enhancement. The imagery and colours are ravishing enough, and a 2D version is also available.

Fans of Princes And Princesses will know the drill: at a cinema every night, a young boy and girl meet with an elderly technician to dress up and act out stories. They come up with the settings, time periods and stories and then, courtesy of a little bit of magic, are dressed and inserted into the tales themselves.

The first tale The Werewolf is the story of two sisters in love with the same prince. He becomes engaged to the older one, much to the sadness of the younger one who has loved him all her life. However, when the prince announces to his fiancée that he is in fact a werewolf, she abandons him and locks him forever in his wolf state.

In The Chosen One and The City Of Gold, set in Aztec times, a young man arrives in the city of gold on the day when a beautiful young girl is to be chosen as a human sacrifice to the monster which protects the city. He resolves to break the cycle of killing.

The fourth story, Boy Tam-Tam, sees Ocelot come back to the Africa of Kirikou. A would-be tam tam player is dismissed by everyone in his village until he learns how to play the magic tam-tam which will save them from their enemies.

In The Boy Who Never Lied, set in Tibet, the king of Tibet makes a bet with a neighbouring monarch that the boy who rides the nation’s talking horse cannot be made to lie. The monarch enlists his beautiful daughter to hatch a devious plan that will force him to lie.

The final tale, The Doe-Girl and the Architect’s Son, which bears some similarities to Azur Et Asmar, sees a young man seek out a fairy to transform his fiancée back to human form after she is turned into a doe by a jealous sorcerer.

Each setting, of course, is gorgeously rendered and the backgrounds and colours are stunning. The voice cast gives it their all, while the ritual of preparation for each tale - the discussions about each story, the dressing of the boy and girl by the costume machine, the hooting owl in the cinema - has a repetitive appeal which acts as the glue between the stories.