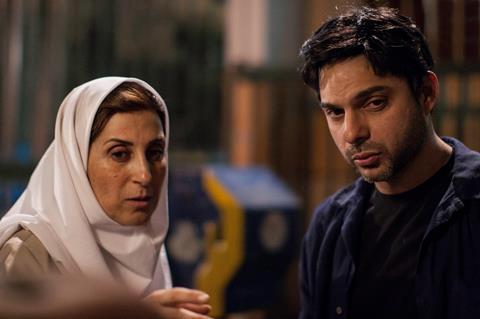 Wearing its handheld, on-the-hoof shooting style prominently on its sleeve, this is an indie curio that will appeal to anyone interested in a less internationalised form of Iranian cinema than we’re used to seeing in the West.

Some of the segments work well, and it’s refreshing to see themes such as domestic abuse, drug addiction and workers’ rights being aired so openly and honestly in an Iranian film. But although characters from different narrative strands meet and overlap, and though you don’t need to be familiar with the director’s oeuvre to appreciate it, Tales remains more of a loose short story collection than a filmic novel. Even within this genre, its vignettes lack the tight thematic cross-struts of, say, Short Cuts, or the pressure of place created by the confined location of a multi-story film like Abbas Kiarostami’s Ten.

If the director is less well known than colleagues such as Kiarostami, Panahi or Farhadi, that’s partly because she’s always insisted on making films in Iran for Iranian audiences – with all the problems this entails. Coming out eight years after her previous feature, Tales was made as a series of short films in order to get around filming permit regulations, which until recently were ultra-strict for full-length features but more permissive for shorts. Though it has now been granted a screening licence of sorts, it seems likely that Tales will garner more spectators on its international festival tour than it does back home.

One of the best moments in the film comes at the end of the first segment – a sort of meta-cinematic bookend centering on a documentary director who is trying to get permission to shoot a film about the everyday problems of ordinary Iranians. We fully expect to follow the filmmaker when he gets out of the cab he’s been shooting handheld video footage from, but instead it’s the taxi driver, Abbas, that we stay with. We don’t need the prompt of the name to read this as a gentle snub to Kiarostami’s intellectual trickery, a sign that the director is throwing in her lot fully with the common people, without self-conscious reserve.

The narrative baton will be passed from Abbas to Touba, the mother he is ashamed at having driven into debt, and again from her vain attempts to force her former employers to cough up her redundancy pay to the travails of a retired civil servant she meets at a government ministry, where they are both waiting for redress from pen-pushing bureaucrats who care more about their dinner and their mistresses than the problems of the old and dispossessed.

Other interlocked segments feature a minibus journey with echoes of Ken Loach in which Touba and her laid-off co-workers discuss their lives and grievances while driving to their former factory to protest against their frozen payments; scenes set in a drug rehab clinic for women, where one of the volunteers is a victim of domestic abuse (easily the weakest and least developed of the dramatic strands); and a convincingly scripted and acted sequence involving one of Touba’s laid-off colleagues and a letter his wife receives from her first husband – its study of how kids are caught up in parental skirmishes reminiscent of A Separation.

Tonally, melodrama and wry social observation fight for supremacy, the latter veering convincingly towards satire in the government ministry sequence, the former pushing into soap territory in the drug rehab centre. The city is a constant, oppressive presence; characters criss-cross it without ever really reaching a destination, simply caught in the deafening traffic, which is where, for want of a better place, life happens.

Wearing its handheld, on-the-hoof shooting style prominently on its sleeve, this is an indie curio that will appeal to anyone interested in a less internationalised form of Iranian cinema than we’re used to seeing in the West – one that even has certain affinities with a certain brand of grim yet sentimental Indian arthouse drama.