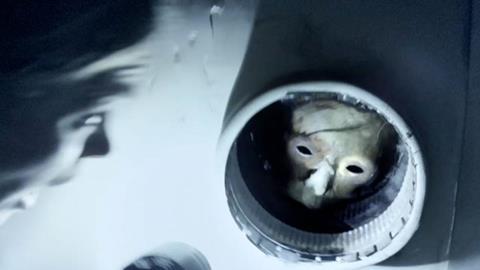 ‘Well, speaking of ingesting experimental chemicals, what are you doing this weekend?’  An effective development of the found footage horror movie, this low-budget exercise in mindwarping opens with documentary clips (including President Clinton apologising for the CIA’s MK-ULTRA program of unethical drugs experiments of the 1960s) and to-camera chat from would-be novelist James Hirsch (Michael McMillian) and his longtime friend, journalist Anne Roland (Katia Winter).

James is filmed as he takes the strain of drug used in the old experiments as part of a writing project.  This goes wrong, with a glimpse of James’s distorted face, and he disappears, leaving his photographer Renny Seegan (Alex Gianopoulos) unable to answer police questions in a black and white videotaped interview.

Renny disappears mysteriously too and Anne feels obligated to investigate, declaring this her final collaboration with James … gradually, as the film progresses, writer-director Blair Erickson abandons the found footage conceit, keeping up hand-held camerawork and minimally-lit creepiness, but bringing in a more conventional filmmaking style, including background music, proper editing and measured performances.

Learning that James, like others who’ve disappeared after taking the drug, claim that they got the stuff from ‘friends in Colorado’, Anne makes a connection with burnout counterculture novelist Thomas Blackburn (Ted Levine), who once published a novel called Friends In Colorado.

Anne approaches the prickly Blackburn, offering to take the drug with him, and he introduces her to chemist Callie (Jennie Gabrielle), who has the original recipe — which involves chemicals harvested from human brains.  Callie is affected badly, ranting ‘they want to wear us’ and distorting like James, and Anne and Blackburn, who may or may not be tripping, locate first her laboratory and then the original MK-ULTRA site in the desert.

Probing monster-haunted unethical military science facilities is one of this year’s things – the film premiered at the UK’s FrightFest genre festival, and three other films there (Frankenstein’s Army, The Dyatlov Pass Incident, Outpost III Rise Of The Spetsnaz) go this route – but this has a wider frame of reference than Nazi zombies and paranormal paperbacks, with Blackburn citing HP Lovecraft’s From Beyond as a revelatory text, making this a tardy gloss on Stuart Gordon’s 1985 film of that short story.

It is suggested that the drug makes human brains beacons for extra-dimensional hostile entities which can move in and take over, and a flurry of revelations near the climax bring Anne and James back together (for a pretty good scare) and indicate that many of the film’s characters have been involved in this for longer than they think and can remember.

A solidly unsettling little picture with good performances from veteran Levine as a fleshed-out Ken Kesey-cum-Philip Dick-cum-Robert Anton Wilson character and Winter as the driven, unusual heroine.  It does have a lot of the usual found footage wandering, but stages its scary moments very well – with one great jump moment. The fact that Zachary Quinto (Mr Spock in the new Star Trek franchise) is amongst the producers will help marketing and attention.

Screenplay: Blair Erickson, based on the story by Daniel J Healy