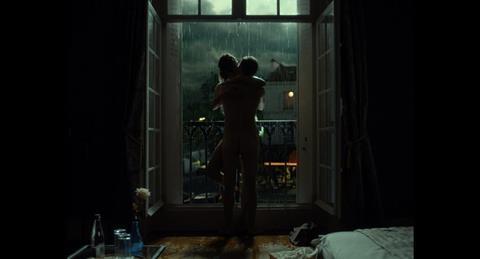 Indefatigable French actor Mathieu Amalric has had an odd occasional career on the other side of the camera, jumping with magpie eclecticism from theme to theme - family comedy, political media, the new burlesque scene - with hit-and-miss results. However, he scores his most accomplished directing achievement yet in The Blue Room (La Chambre Bleue), in which he also stars - a tense adaptation of a Georges Simenon novel.

The film is on one hand deeply traditional - a small-town story of a crime investigation hinging on adulterous passion and bourgeois secrets. On the other hand, however, this is a clipped, fragmented piece of cinematic modernism, shuffling its time frames in a staccato narrative that makes for a tense, involving experience from start to finish.

The criminal and sexual content (including full frontal male and female nudity), echoes of a classic Gallic film noir tradition, and a terrific lead performance from Amalric should make this a hot item for distributors and festivals alike, despite its unusually concise running time.

Looking more haunted and vulnerable than ever, Amalric plays the classic bourgeois in deep water - Julien, a dealer in industrial machinery, who lives in the small town of Saint-Justin and lives an ostensibly happy domestic life with wife Delphine (Léa Drucker) and their young daughter. But at the start of the film, we see Julien enjoying a torrid sexual tryst in the hotel room of the title, in the company of Esther (the film’s co-writer Stéphanie Cléau), the local pharmacist, who’s also married.

Precisely what has happened as a result of the couple’s secret liaison is teasingly spelled out slowly, in snippets of information, and it’s not until nearly an hour in that the film reveals in full the nature of the case that Julien is caught up in - and the reason he’s being interrogated by local police (including a cop played by director Serge Bozon) and examining magistrate Diem (a brilliant, hawk-like Laurent Poitrenaux).

We’re in prime Simenon territory, and classic French thriller territory too, in the tradition of Clouzot and Chabrol (paid homage in the image of a single droplet of blood). But the film’s daring execution is more in the mode of the modernist fragmentation of Alain Resnais, weaving a complex network of close-ups (showing telling details of both symbolic and narrative import), while the sound design knits voice-overs, overheard dialogue, legal testimony and unnervingly repeated lines of dialogue, to vertiginous effect.

Cléau, plucked eyebrows making her resemble a ’40s film siren, is an unnerving, seductive presence, and Amalric evokes desperation and anxiety in his inimitable way. The film is elegantly shot by Christophe Beaucarne in Academy ratio - inducing claustrophobia, as well as invoking classic cinema - and the editing is a jigsaw tour de force by Francois Gedigier. A knowingly florid retro score by Grégoire Hetzel completes a delicious package.