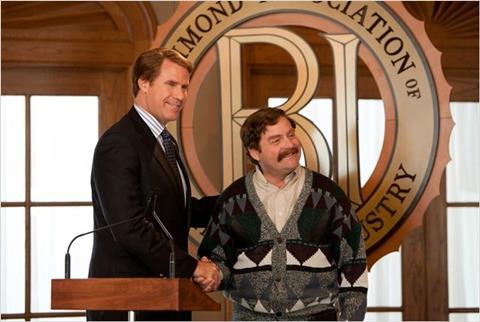 A hopelessly broad and undisciplined comedy that features a small handful of amusing ideas but otherwise evinces no great effort or intelligence, The Campaign represents a major missed opportunity for rich Stateside election year satire. Will Ferrell and Zach Galifianakis each exercise their well-toned individual comedic chops, but director Jay Roach’s movie feels to its very core vague and scared of offending anyone, and therefore has trouble connecting in any meaningful way, no matter the heightened absurdity of its backdrop.

The film’s technical package is polished, and Roach does keep the pace moving.

Squaring off next week against Universal’s The Bourne Legacy, The Campaign should benefit from Ferrell and Galifianakis’ commercial drawing power, and their relentless prowling of the talk show circuit over the last couple weeks, along with the film’s appearance of topicality. Paradoxically, the very things that dilute the movie’s comedy in the United States could help it achieve better-than-expected returns abroad.

When popular Democratic incumbent North Carolina congressman Cam Brady (Ferrell) commits a major gaffe in advance of what was to be another unopposed election bid, the wealthy and unscrupulous Motch brothers (John Lithgow and Dan Aykroyd), looking to cut down on shipping costs and open a couple of their Chinese sweatshops in America, decide to fund a rival Republican candidate.

Director Roach took a bit of a break from comedy in helming the acclaimed HBO political dramas Recount and Game Change, and it’s undoubtedly this focus that led to his match with this material. Ergo, the filmmakers attempt to ground their work through a litany of cameos by members of the American cable news punditocracy. But The Campaign is untethered to political realities, and for the most part completely ignores the United States’ current political climate.

That the Republican machine would nominate as fatuous and fey a character as Huggins is of course ridiculous, and part of the movie’s comedic conceit. But the movie doesn’t fully exploit Huggins’ struggle to connect with voters on a personal level. And with his perfect, shampoo model hair and marital philandering, Brady is nominally modeled on former North Carolina senator John Edwards. But of course Brady’s unabashed hankering for his party’s vice presidential slot ignores Democratic incumbent President Barack Obama, or even a fictional stand-in.

These small missteps and false details add up. They make for a movie that feels generic and toothless instead of plugged in and alive. Chris Henchy and Shawn Harwell’s script aims for big targets, grabbing a couple story beats from political scandals of the last several years, but it never roots down into the foibles of party politics. Instead, it opts to track swings in public opinion for the two candidates through polling response to exaggerated events, as with an uptick for Huggins related to an “accidental” hunting shooting. Unintentionally, this says a lot about the filmmakers’ regard for their audience.

The film’s technical package is polished, and Roach does keep the pace moving. Performance-wise, Ferrell and Galifianakis are not so much cast against their strengths as they are cast against type with respect to their political profiles — Brady is a cocksure blowhard and Huggins a touchy-feely weirdo. But this atypicality and briskness of pace can’t rescue The Campaign.