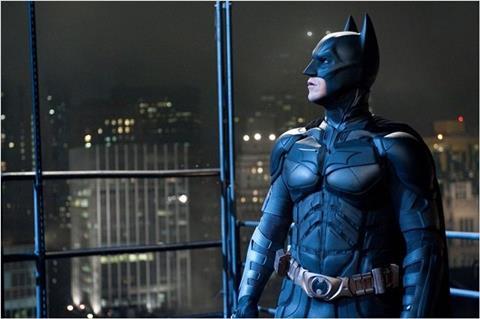 Stirring in its broad strokes but shakier in its handling of the nuances of character and story, The Dark Knight Rises doesn’t lack for ambition or vision. Nonetheless, this final instalment in director Christopher Nolan’s Batman trilogy is the first of the series not to smoothly execute its grand aspirations. The film suffers a bit from a glut of new characters — none of whom are as indelible as Heath Ledger’s Joker from The Dark Knight — but is helped along by Nolan’s continued insistence on emotional resonance over mindless spectacle. If there’s a slight sense of disappointment that this sequel can’t match the heights of the first two films, there’s no shame in a major studio tentpole daring to let its reach exceed its grasp.

As would be expected, the effects, cinematography and production design are all top-notch.

Opening July 20, this Warner Bros. release will be pitted in the media against the gaudy grosses of The Avengers (currently at $1.5b), not to mention The Dark Knight’s $1b. Returns should be spectacular for The Dark Knight Rises, but with this being the longest film in the series at 164 minutes — The Dark Knight clocked in at around 150 minutes — and it being comparably dark in tone to The Dark Knight, there’s always a chance it won’t reach a billion dollars, a staggering amount of money that’s suddenly become the new measuring stick for Hollywood blockbuster success.

Taking place eight years after The Dark Knight, the new film presents us with a Gotham City in which crime has been greatly reduced, Batman has gone into retirement, and Bruce Wayne (Christian Bale) is a recluse living in his mansion, still reeling from the death of his beloved Rachel. But he feels compelled to put the cape on again when a vicious madman named Bane (Tom Hardy) plots to destroy Gotham and Selina Kyle (Anne Hathaway), a mysterious thief, eyes Bruce as her latest victim.

Starting with 2005’s Batman Begins, Nolan has sought to make intelligent, sombre Batman movies that have a brooding, operatic quality to them, presenting the Caped Crusader as something of a tragic figure. This approach reached its apex with 2008’s The Dark Knight, a sublime crime thriller that featured new, sharply-drawn characters played by Ledger (who won a posthumous Oscar) and Aaron Eckhart. If anything, The Dark Knight Rises’ tone is even bleaker, focusing on aging, regret, moral hypocrisy, and the persistence of evil. But while Nolan remains a master of mood, Rises suffers in its attempts to integrate four new characters who all turn out to be incredibly important components in the film’s sweeping story.

As a replacement for the slain Rachel — played by Katie Holmes in Batman Begins and Maggie Gyllenhaal in the sequel — the filmmakers have given Bruce two possible love interests who are meant to appeal to different aspects of his personality. As the demure Miranda Tate, Marion Cotillard exudes a sweet warmth, while Hathaway as the conniving, acidic Selina Kyle is a dangerous seductress. There’s potential for an interesting dynamic between the three characters, but Nolan and co-writer Jonathan Nolan don’t offer enough emotional beats to either woman’s story to allow them to become compelling romantic figures. Though both actresses deliver assured performances, their characters stay symbols, never quite becoming people.

This is also problematic with Joseph Gordon-Levitt’s portrayal of young, inexperienced policeman John Blake. At first, John seems too inconsequential to be part of this film’s grand design, but soon it becomes clear that the cop’s unexpected childhood connection to Bruce Wayne will make him one of the narrative’s emotional guideposts, allowing him to be a metaphor for uncorrupted idealism. Like Cotillard, Gordon-Levitt first worked with Nolan on Inception, and he’s such a likeable, empathetic presence that one feels John’s vulnerability as he tries to live up to the image of goodness he learned by idolizing Batman. But at the same time, John is largely a storytelling device that Gordon-Levitt has to humanize.

The final new character, that of the evil Bane, is played by Hardy, another Inception alum, and certainly his task is the most difficult. Not only does he portray a villain who’s less well-known than the Joker, he has to follow in the footsteps of Ledger’s chilling performance. Perhaps intentionally, Bane is the opposite of the Joker: reserved and powerful, rather than dynamic and slippery. But because he’s concealed behind an iron mask that covers his mouth — giving the impression that he has a jaw of terrifying metal fangs — Hardy’s performance is more about physical presence, and he makes for an imposing figure. Still, one can’t help but feel that he’s a bit one-note, stripping his showdowns with Batman of some of their dramatic power.

By including so many new players — not to mention find room for returning characters like Commissioner Gordon (Gary Oldman), Lucius Fox (Morgan Freeman) and Alfred (Michael Caine) — The Dark Knight Rises sometimes struggles to give everyone enough to do. (For as many characters as The Avengers had, this film might top it.) But what holds the film together is a thematic through-line that, although a bit inelegant at times, proves to be a satisfying conclusion for what Nolan and Bale have established in the first two instalments.

If Batman Begins was about Bruce’s acceptance of his responsibility to be a hero, and The Dark Knight concerned his realisation of the limits of heroism, then The Dark Knight Rises is something of a resurrection story, allowing Bruce to face old demons that led him to become Batman in the first place. The unifying strength of these Batman films has been Nolan’s seriousness in treating Batman as a complex figure, and Bale has been incredibly effective at personalizing an iconic superhero, giving him all the gravitas required. For all the fine actors who have populated this trilogy, it’s important to remember how crucial Bale’s contribution has been as the films’ emotional centre.

As would be expected, the effects, cinematography and production design are all top-notch. But special mention goes to Hans Zimmer, who co-scored Batman Begins and The Dark Knight with James Newton Howard. Rises is his first solo effort in the trilogy, and his ominous music — particularly the haunting, rhythmic theme for Bane — gives the film much of its creeping sense of unease. Nolan has always aspired to make Batman films with a dramatic heft that transcends simple comic-book-movie escapism, and Zimmer adds plenty of instrumental weight to the proceedings.