The Girls In The Band 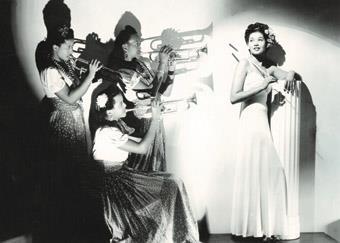 A fascinating, moving and wonderfully tuneful documentary, Judy Chaikin’s absorbing The Girls In The Band is a real treat for music-lovers – especially jazz fans – as well as being a powerful examination of the struggles by talented musicians to break into the resolutely male world of jazz.

Judy Chaikin has crafted a film that is tuneful, thoughtful and constantly fascinating,

The film – which screened at the Dubai International Film Festival and the Vancouver Film Festival – is a must for any savvy arts broadcaster and has the style, panache and provocative storyline to also work theatrically. It is the classic tale of the struggle against adversity and lack of recognition…plus it will make you want to go out an buy the soundtrack – or at least track down some of the featured musicians’ works.

The film opens with the classic 1958 Art Kane photograph that gathered a host of famous jazz musicians to Harlem for a memorable image. Pretty much all of folk there are men, but standing to one side and in mid-conversation are snapped pianists Marian McPartland and Mary Lou Williams…but patently missing were the hundreds of female jazz musicians working hard to make a mark on a business where it had long been thought that women didn’t have the talent or stamina to play jazz.

Blending interviews with inspiration women musicians and a breathtaking selection of archive footage, filmmaker Judy Chaikin takes a fascinating trip through 20th century history to look behind the scenes and chart how the how the hard work, disappointments, abuse and occasional acclaim of early female jazz musicians helped pave the way for later generations.

In the early days of swing women occasionally featured in bands – such as The Phil Spitalny Orchestra, The Fayettes, Harvey and the Debutants and The Ingénues – but were usually deemed novelty acts, with the unwritten law that women couldn’t play in male bands.

Many of the all-female bands were forced to dress in a certain way – as one musician comments “the girls had to look like starlets – you couldn’t be grey or overweight – though subtle changed started to offer more opportunities. The impressive International Sweethearts of Rhythm was drawn from a school for the underprivileged and made up of black, Mexican and one Chinese musician.

Saxophonist Roz Cron movingly describes how she was invited to join the International Sweethearts of Rhythm as the first white member and talks about the racism the band encountered as they toured the American south, while trumpet player Clora Bryant discuses how hard it was to be taken seriously, with trumpet especially not deemed an instrument for women to play properly.

During World War II the women were much in demand while the male jazz players fought, but only found their bookings cancelled when the men returned. Musicians such as Mary Lou Williams and Melba Liston are rightly acclaimed, along with Louis Armstrong’s wife Lil Hardin Armstrong, a talented musician, composer and arranger who never received the same acclaimed as her husband.

Judy Chaikin directs with a good deal of affection and a whole lot of compassion for her subjects and has crafted a film that is tuneful, thoughtful and constantly fascinating,