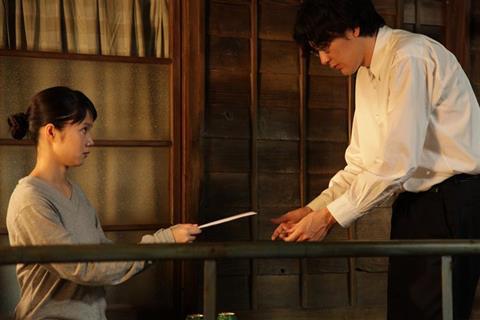 Cult Japanese director Yuya Ishii (who made Sawako Decides and Mitsuko Delivers) has delivered another gently absorbing drama featuring an oddball lead, this time Mitsuya Majime (Ryuhei Matsuda), an anti-social bookworm who lands a dream job - for him - researching for The Great Passage, a new ‘living language’ dictionary planned by a Tokyo publisher.

The film pays affectionate – and even old-fashioned – tribute to the world of words and dictionaries, while also finding space for a tender and slow-paced romance that would be out-of-step for a contemporary story.

The Great Passage (Fune wo amu), which had its world premiere at the Hong Kong International Film Festival, is set to open in Japan on April 13. Yuya Ishii’s strong international reputation will make the film a must-see for art house buyers, and while it lacks the sheer quirky charm that defined Sawako Decides and Mitsuko Delivers the film has the class to appeal.

The gently paced film - which relishes language and utilises low-key performances – shows how solitary and socially clumsy Mitsuya Majime (played with mild-mannered charm by Matsuda) comes to realise that even compiling a dictionary calls for team work. He gets the job to replace a chief editor due to his single-minded obsession with words (as one character points out, even his name means ‘diligent’), having been a post-graduate in linguistics, but struggling to make his way as a salesman.

Staying at the Sou-Un-Sou Rooming House, he enjoys the bluntness of his elderly landlady and the occasional company of a ginger cat named Tora-san, but finds his ordered world turned on its head by the arrival of his landlady’s granddaughter Kaguya Hayashi (Aoi Miyazaki), whose own obsession with cooking (and super-sharp cooking knives in particular) tallies with his desire for focus and attention to detail.

The eccentric Majime eventually learns to bond with his co-workers and slowly and diligently gets to know Kaguya, eventually even learning how to win her over.  He eventually succeeds not only in helping compile a successful and acclaimed dictionary, but also wins the heart of the woman he loves.

Set in the mid 1990s (which means less emphasis on computers, with even - in one scene - the mobile phone seen as a new-fangled device) the film pays affectionate – and even old-fashioned – tribute to the world of words and dictionaries, while also finding space for a tender and slow-paced romance that would be out-of-step for a contemporary story.

Screenplay: Kansaku Watanabe, based on the novel by Shiwon Miura