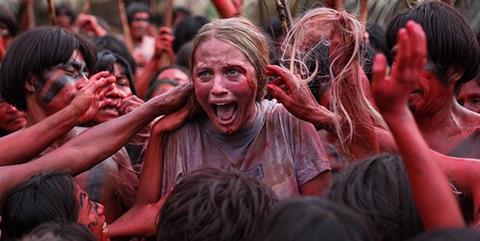 Horror director Eli Roth smartly courts the gore community with his latest exploitation shocker The Green Inferno, an evocatively titled (though there is no actual ‘inferno’) film that pays homage to the Italian cannibal films of the 1970s and ‘80s and features enough bloody carnage to keep horror fans more than happy.

There are satirical moments that poke fun at the social-media generation, but in truth The Green Inferno is really about the shock value and the gore, and Roth delivers on both counts.

Despite the fact that the actual blood’n’guts comes rather late in the film, there is enough expectation about what is to come that Roth succeeds in keeping the film nicely tense. There is also a subtext lurking in there somewhere about activism against multinationals destroying the environment and impacting on indigenous tribes, but that all takes second place to the notion of man-eating tribespeople munching their way through a bunch of imperiled students.

After stints as producer (The Last Exorcism) and actor (Aftershock), Roth heads back behind the camera for this variation on a sub-genre that hasn’t seen the light of day in mainstream cinemas. Cannibalism itself may be old hat in horror flicks, but the ‘kids forming the main dish for native headhunters’ movie is rarely seen these days, and is dusted off here to pretty good effect.

College student Justine (Lorenza Izzo) takes a shine to the leader of a group of campus radicals, and she is soon roped into a scheme to fly down to Peru and disrupt an illegal deforestation of a jungle area that is also endangering an isolated Amazonian tribe. Their stunt succeeds well enough, but their plane home crashes in the jungle (cue some nicely staged deaths) and before you know it, the remaining survivors are soon sound asleep with some blowpipe darts in their necks.

Taken off to a tribal village they soon realise they are to be the main course, which naturally enough leads to much shrieking and wailing. First man down is the plumpest of the students (maybe there is another moral or subtext there) who – in the film’s most gruesome sequence – is graphically chopped apart after having his eyes and face nibbled on by the tribal leader.

The remaining students plan to try and escape, with Justine (the tribe also has female circumcision planned for her) bonding with a young boy in a bid to get some help.  Unsurprisingly, the bodies keep on falling – with torture and munching on un-cooked human flesh also part of the agenda – before a bid for freedom is finally made.

Where the film works best is in the evocative use of the Amazonian locations along the Aguirre River, with Roth recruiting members of a real local tribe rather than actors to play the cannibals. Whether this is uncomfortably exploitative is a moot point, but it does aid the sense of realism. In truth the film is slow to get going – there is about 50 minutes of rather plodding campus radicalism chat before they all are jungle-bound and things start getting tense.

The gore and violence is nicely staged, though Roth is rather restrained in terms of the actual cannibalism (though there is plenty of footage of preparation of the flesh, just like any good cooking programme) and punctuates the final section with old-fashioned chase action. There are satirical moments that poke fun at the social-media generation, but in truth The Green Inferno is really about the shock value and the gore, and Roth delivers on both counts.