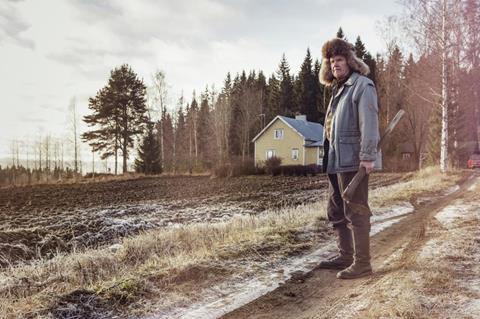 Audiences who savoured the comic odyssey of The One Hundred Year Old Man are equally likely to embrace the journey of another elderly rascal in The Grump (Mielensapahoittaja), a sweetly sentimental adaptation of the bestselling Tuomas Kyro novel. The comedy is often broad but the emotional upheavals become increasingly heartfelt in what ultimately emerges as a poignant exploration of loneliness, old age and the pitfalls and pleasures of remaining resolutely stuck in your ways.

In the end, The Grump wins everyone over by discovering that the perhaps the modern world isn’t so bad after all.

All the ingredients are present to ensure another crowd-pleasing domestic success for Finnish director Dome Karukoski (The Home Of Dark Butterfies, Lapland Odyssey etc) and the film should also travel. There is even remake potential in a film that would serve as an ideal star vehicle for someone of the Eastwood/Nicholson generation.

The Grump (Antti Litja) is a sour-faced old curmudgeon happily attached to a rosy-eyed vision of the past. Stubbornly independent, he believes in a time when bankers were honest, women were submissive homemakers, a car could last a lifetime and no man’s sense of his own masculinity was complete without the ownership of a chainsaw. Montage sequences testify to the paradise of a past when ” skis were made of wood and men were made of iron.”

Incapacitated by a fall, the Grump is forced to rely on the kindness of his family. His mild-mannered son (Ikka Forss) moves to the family farm whilst daughter-in-law Liisa (Mari Perankoski) is left to babysit the old man during his physiotherapy in the city. A good deal of the comedy in The Grump stems from the clash of temperaments between the old man and the increasingly exasperated Liisa.

Every conversation is a battleground in which nothing is good enough, nobody meets his standards and every newfangled invention defeats him. Physical comedy is reminiscent of vintage Jacques Tati as he copes with the horrors of electric toothbrushes, mobile phones and central heating.  He believes: ” If you are cold you put on an extra pair of socks or go skiing.”

In the first half of the film The Grump is a sanctimonious, sexist, racist windbag and you can quite understand why people find him insufferable. His attitude is tiring and the film loses a little momentum as the character threatens to become wearing. The situation is redeemed as it becomes apparent that the old fellow still has something to offer the modern world as he charms Liisa’s business clients from Russia and offers bed and board to a young homeless man.

The Grump’s disruptive presence has echoes of classic comedies from The Man Who Came To Dinner to Boudu Saved From Drowning. The longer he stays with his son, the more he helps to expose the cracks in the son’s marriage and his own failings as a parent and husband. We get to see some of the vulnerability in a man who has outlived his time and the character undergoes a modest transformation rather than remaining wearily one-note.

Returning to the role he originally created on the radio, Antti Litja expertly plays the range of his character from irritating to endearing and both Ikka Forsse and Mari Perankoski are given the opportunity to show more facets to their characters then mere exasperation.

Sepia-toned flashbacks and a musical score that is heavy on heart-tugging violins and heavenly choruses help push the film towards the land of schmaltz but Karukoski has enough grit and tenderness in the mixture to ensure pathos rather than bathos. In the end, The Grump wins everyone over by discovering that the perhaps the modern world isn’t so bad after all.

Screenplay: Dome Karukoski, Tomas Kyro based on the books by Kyro