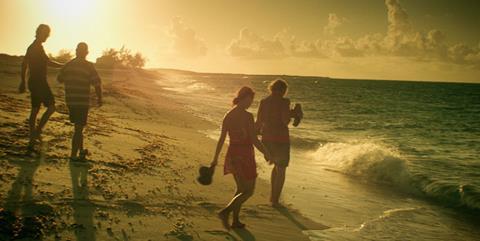 This engagingly fruity spouse-swap comedy romp offers some modestly naughty film entertainment, likely to be appealing in its home territory, but of strictly limited appeal elsewhere, with home entertainment the most likely route.

The Holy Quaternity (a title which may well confuse or bemuse, but at least isn’t provocative) offers plenty of good-natured sex comedy entertainment.

Czech filmmaker Jan Hrebejk smartly keeps The Holy Quaternity (Svatá Ctverice) brief and brisk, and while it offers a smattering of sex and comedy set against the backdrop of a tropical idyll, it rarely offers much in the way of insight, preferring too never stray not too far from the bawdy.

Middle-aged married couple Vitek (JiríLangmajer) and Marie (MarikaProchazkova) live nearby to their best friends Ondra (Hynek Cermak) and Dita (Viktorie Cermakova). Ondra and Dita’s two teen sons are showing signs of interest in Vitek and Marie’s two daughters, but the film heads off into even odder territory when the four parents decide to form a menage-a-quatre while on a tropical holiday together.

Cue shots of beautiful beaches and naked bodies a-plenty as the foursome set about trying to rekindle their marriages, but finding their friend’s partners more attractive than their own. The only real question the film asks, is will they get away with it and live happily ever after? Along the way there is plenty of fruity fun to be had and while no classic The Holy Quaternity (a title which may well confuse or bemuse, but at least isn’t provocative) offers plenty of good-natured sex comedy entertainment.